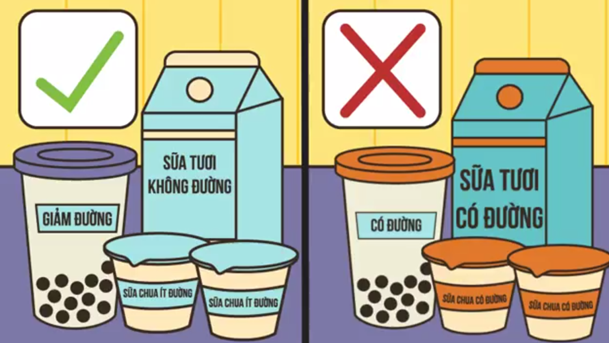 Among children and adolescents, 5 to 19 years old, overweight and obesity increased from 8.5 percent to 19 percent from 2010 to 2020 in Vietnam, according to the General Nutrition Survey. Helping children to make healthy food choices – and reduce their consumption of sugar in particular – may reverse trends in childhood obesity and prevent obesity in adulthood. However, how to nudge children to choose more positive behaviors is an important area of research.

In 2020, researchers conducted a lab-in the-field experiment in 12 primary schools in Dong Anh, a peri-urban district outside of Hanoi, Vietnam. Each classroom was assigned to one of three experimental conditions and then ten students were randomly selected from each classroom to participate. The study and its results were recently published in Economics & Human Biology.

In the experiment, two groups of children watched a short, animated video about the risks of eating too much sugar. After the video, one group of children were asked to record what they had learned and were told that their message would be sent to children in other schools to promote healthy eating. Then they were asked to answer a brief set of simple questions on paper concerning their own sugar eating habits. This was intended to make children aware that they may not be following their own advice, a behavioral science concept known as hypocrisy-inducement. The second group of children just watched the video, and a third group of children watched a video on traffic safety. More than 1200 children participated in this study.

The 12 schools were divided into two groups. At the end of the experiment, children in six schools were immediately offered cartons of milk as a thank you gift and could choose between sweetened milk, reduced-sugar milk, and unsweetened milk. Children in the other six schools made their milk choice after performing another task, which took around 15 minutes. The choice of milk was the outcome measure of healthier eating behavior.

Results from the experiment indicated that the 75-second animated video almost doubled the proportion of children selecting healthier milk. Watching the video increased the likelihood that a child would select healthier milk options by more than 30 percent in the no-delay condition and by 15 percent in the group that made their milk choice after a 15-minute delay. Contrary to what was expected, drawing attention to the children’s own sugar eating habits had no significant additional effect on the food choices compared to watching the short video alone.

Future research could test whether the repetition of health tips could support habit formation and how often such reminders should take place. The format – a short, animated video – also has potential for scalability and could be easily combined with other habit-forming interventions, such as part of a school-based health curriculum. Other recent and relevant publications from Vietnam are available here.

The CGIAR Initiative on Sustainable Healthy Diets through Food Systems Transformation (SHiFT) combines high-quality nutritional and social science research capacity with development partnerships to generate innovative, robust solutions that contribute to healthier, more sustainable dietary choices and consumption of sustainable healthy diets. It builds on CGIAR’s unparalleled track record of agricultural research for development, including ten years of work on food systems and nutrition under the CGIAR Research Program on Agriculture for Nutrition and Health (A4NH), particularly under the research flagship Food Systems for Healthier Diets.