USAID-AfricaRice project sets the stage for a resilient, vibrant seed industry in Senegal 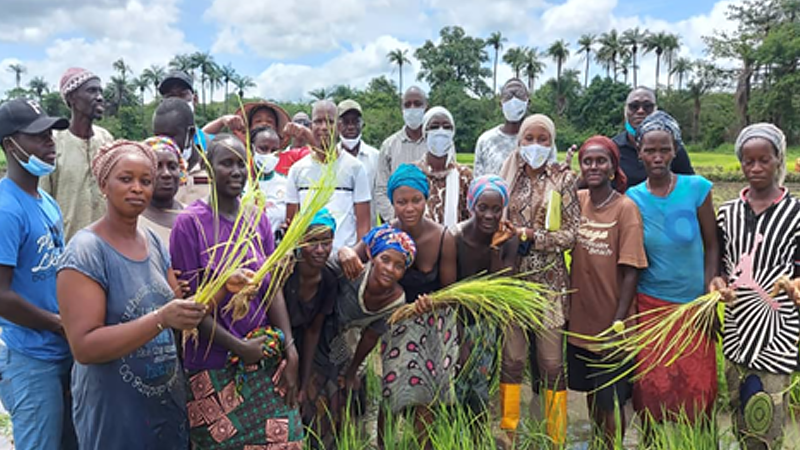 An innovative public-private partnership-based project, led by the Africa Rice Center (AfricaRice) with support from the United States Agency for International Development (USAID), has not only boosted the resilience of Senegal’s seed value chains to mitigate the impact of COVID-19 on food security, but has also laid the foundation for a resilient and vibrant national seed industry to meet the needs of the country.

Rice is vitally important for Senegal, which has a per capita rice consumption of about 110 kg a year – on a par with many Asian countries. To meet this demand, improvements in the quality of and access to seeds are indispensable for increasing domestic rice production and reducing the country’s high rice import dependency.

The project’s initial focus was therefore the development of the rice seed sector in the Senegal River Valley and the central and southern regions of Senegal. But, with the advent of the pandemic and its impact on food security, the project’s mandate was expanded to cover millet, sorghum, and maize and its term was extended from October 2020 to April 2022.

“The availability of quality seeds became the greatest challenge for farmers when the COVID-19 pandemic hit Senegal,” said Dr Ernest Asiedu, AfricaRice Coordinator of the Rice Seed Scaling Project in Senegal. “Thanks to USAID support, as part of an emergency measure, the project enabled Senegal to respond to seed shortages in rice, millet, maize, and sorghum, caused by disruptions in seed supply due to the pandemic.”

The timely response to the pandemic was one of many significant achievements of the project, as highlighted below, which contribute to a sustainable seed sector development in the country:

These accomplishments were commended by representatives from USAID, the Ministry of Agriculture and Rural Equipment (MAER) and the private sector at the project closeout workshop on 28 July 2022 in Saint Louis, Senegal.

Congratulating AfricaRice and its partners for successfully managing the project, Mr Abdoulaye Ndia, USAID Agricultural Team Leader in Senegal, remarked, “The USAID-Economic Growth Office (EGO) is satisfied with the overwhelming achievements of the project.”

MAER Representative, Ms Ballel Bassoum, said, “MAER is grateful to the project for an effective collaboration with, and support to the public institutions – ISRA, Regional Divisions for Rural Development (DRDR) and the Seed Division (DISEM), as well as to the private sector.”

According to Mr Modou Thiam, Chairman of the National Union of Seed Professionals (UNIS) and representative of the private sector, the best practices promoted by the project will be adopted and the project achievements will be integrated in the operations of the seed companies, their union and the proposed Seed Alliance.

Thanking all the partners involved in the successful completion of the project, Dr Asiedu emphasized that the approaches adopted for the project implementation have effectively enhanced the resilience of the Senegalese seed system to mitigate the impact of COVID-19 and future shocks.

An exit and sustainability strategy has been developed, which will facilitate the integration of the achievements in the seed sector. The USAID also pledged its support to the implementation of the strategy.  “We are proud that the success and the lessons learnt have set the stage to propel the national seed industry towards the realization of its goal of meeting the seed needs of Senegal,” Dr Asiedu concluded.