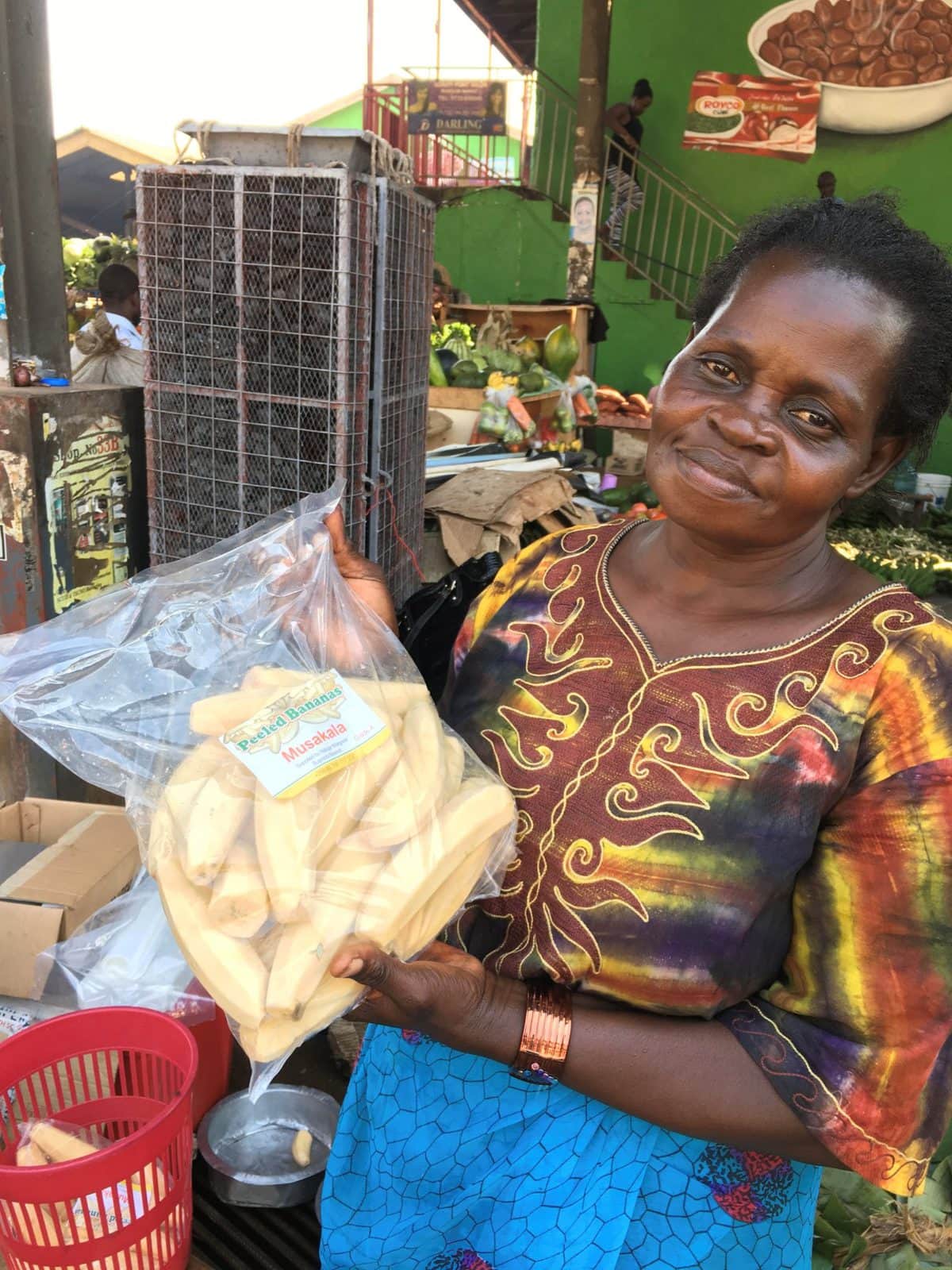 Visiting Margaret Nalujja with Elliot Baligeya of UFVEPA. You can see the charcoal cooler behind her. Margaret sells peeled fingers in 2kg bags. She said the main value is the increased speed of purchase because they are ready to go and you can buy and put them in a vehicle. Photo credit Graham Thiele

Agricultural innovation arises through the dynamic interactions of the actors who grow, process, distribute and consume farm products. An innovation culture requires trust, an appreciation of other perspectives, shared values and stable relationships capable of evolving to meet new challenges. However, these actors (individuals or institutions) have different expertise, as well as unique and sometimes conflicting agendas, making innovation projects complex to manage. Projects that cannot take complexity onboard often fail. Despite the growing recognition that innovations unfold through the repeated interactions of various actors, projects still tend to start with a set plan, a defined timeframe, predetermined outputs, and a tightly controlled process, discouraging any activities other than those designed at the outset, even as conditions change and actors refine their demands and reveal their limitations.

The dilemma is how to plan and manage innovation projects while remaining flexible enough to adapt to discovery, change, and possible surprises along the way. In a recent paper published in Development in Practice, researchers from the CGIAR Research Program on Roots, Tubers and Bananas (RTB) discuss the experience of RTB-ENDURE (Expanding Utilization of roots tubers and bananas and Reducing their Postharvest Losses), a project aimed at fostering innovations for reducing postharvest losses in potato, sweetpotato, cassava, and banana to improve food security and increase income for smallholders, especially women, in Uganda. ENDURE was a complex project entailing a close collaboration among numerous stakeholders, ranging from international research organizations to local partners, including government scientists, universities, NGOs, farmer associations, and private enterprises. The authors identify four key features that allowed ENDURE to respond to the complexity and unpredictability of agricultural innovation.

First, RTB-ENDURE was designed around the Participatory Market Chain Approach (PMCA), a structured (yet flexible) method for learning from farmers, traders, processors, retailers, and chefs, and stimulating commercial, technical, and institutional innovations while sharing ideas, building trust, and ultimately benefiting smallholders and other value chain actors. Innovation cannot be fully planned, so the PMCA implementation varies each time it is applied, as each case requires unique activities and tools to solve its specific problems.

Second, ENDURE was designed in two-stages. The first stage entailed scoping studies, and then the development of seven business cases. Only four cases were selected for funding. Partnerships were strengthened in this diagnostic stage, as they identified the innovations most likely to succeed. In the second stage, more rigorous assessments were conducted and those innovations that had proven technically feasible, economically viable and socially acceptable were promoted and disseminated.

Third, the management was attentive to emerging findings and evolving conditions. As project manager Diego Naziri explains, “Some activities failed to live up to their promise, so we dropped them, or scaled them back. This freed staff and money to focus on better ideas, some of which were not foreseen in the initial project design nor in the business cases. Along the way, we found some exciting new partners, such as a very dynamic local youth group which we brought on board while dropping another partner who was not performing well.” Such adaptations were possible because the donor allowed flexibility in project design and in budget management.

Four, ENDURE systematically promoted feedback and cross-learning. “Instead of recoiling at unforeseen events, the surprise was fed back creatively into ENDURE. Right from the start, the project recognized that surprise was not necessarily a failure,” explains Graham Thiele, RTB Program Director. Even a disappointing surprise can work out for the best. As coordinator of ENDURE’s banana sub-project, Enoch Kikulwe explains, “Initially we wanted to promote the cushioning of banana bunches to reduce bruises on route to market, but then we dropped this idea once we realized that traders did not want to pay for the additional cost. On the other hand, during implementation, we realized that we had underestimated the importance of extending the shelf-life of bananas in the market itself and we diverted resources to introduce and test a charcoal cooler among female retailers. So, we went with that idea instead of cushioning.”

Projects can deal with the complexity inherent in agricultural innovation if they have the flexibility to adapt. Rigid planning and budgeting should be avoided because promising innovations might emerge completely unplanned. Instead, start by bringing many stakeholders together to facilitate a joint understanding, next generate new ideas together. Then learn and adapt while engaging with the problem.

The analysis of ENDURE was written by researchers from the International Potato Center (CIP), the Alliance of Bioversity International and CIAT, and partners. ENDURE was funded by the EU and implemented by the CGIAR Research Program on Roots, Tubers and Bananas (RTB). The Participatory Market Chain Approach (PMCA) was developed by CIP.