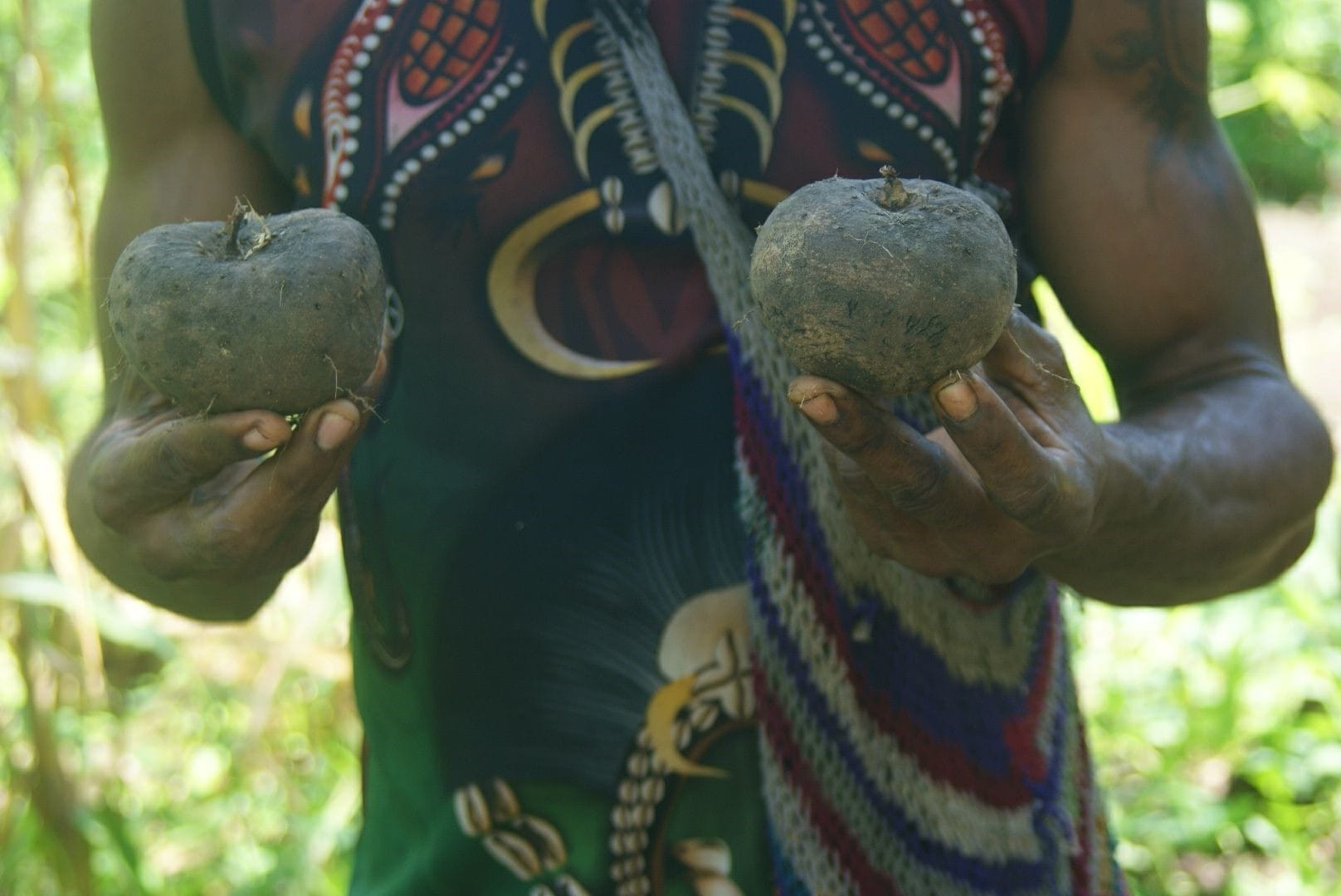 Once upon a time two women, one very beautiful and one not so beautiful, were gathering wild yams in the bush near their village on the island of New Guinea. They collected their yams and then started gathering vegetable leaves. Suddenly a snake appeared and called the women: “Tusss, Tusss, Tuss…,” the snake hissed. “Marry me and I will give you boundless yams.” The beautiful woman refused and ran away. The not-so-beautiful woman accepted, and she and the people of her village lived happily ever after with an endless supply of yams.

Legends like this abound in New Guinea where yams play an important part in the cultural history of many villages. And it’s no wonder that humans have exploited yams for nearly 50,000 years on the island.

The most ancient remains of yam were found in New Guinea

The first humans reached New Guinea about 50,000 years ago when the temperatures and sea levels were lower than today. The Asian mainland extended as far east as Bali and Borneo to form a landmass known as “Sunda.” At that time, New Guinea was not an island but formed the northern part of a large continent that also included Australia and Tasmania, known as “Sahul.”

Yams were most likely among the first plants to be consumed as a food crop in New Guinea. Excavations at archaeological sites in New Guinea have recovered stone artifacts dated from 49,000 to 36,000 years ago showing an abundance of grains consistent with starch from yams, specifically Dioscorea species. The size and morphology of the tuber-like starch grains from samples at Joe’s Garden in the Ivane Valley of the New Guinea Highlands, which is among the oldest human sites in this region, were consistent with the greater yam Dioscorea alata.

New Guinea one of the two centers of greater yam domestication

Our recent characterization of the genetic diversity of a large sample of yam accessions spanning four continents that were conducted to address yam geographical origin and diffusion history supports the hypothesis of independent domestication origins of the Sunda and Sahul gene pools. Considering that the peopling of Sahul dates back to at least 50,000 years ago and hunter-gatherer societies exploited endemic yams in New Guinea up to 49,000–36 000 years ago, it is likely that yam reached the Sahul in wild or pre-domesticated form and was later domesticated there.

This long history of domestication has led to a yam diversity which is an important reservoir of alleles that breeders can mine for traits of interest. As our climate changes and the human population grows, it is of utmost importance to preserve the yam’s wild and cultivated diversity and the farmers’ knowledge associated with it.

To assess the yam in situ diversity, we needed to consider New Guinea as a major site to investigate. With the support of the CGIAR Research Program on Roots, Tubers and Bananas (RTB), Hana Chair (yam geneticist at CIRAD) joined a team and traveled to a genetic diversity hotspot to learn about this yam diversity firsthand.

Our colleagues at Papua New Guinea’s National Agricultural Research Institute (NARI) identified Konguan, a village in the Bogia District of Madang Province, as a hotspot of yam diversity where we would be able to conduct surveys and collect leaf samples.

We recorded six different yam species in Konguan while we were conducting the survey. The farmers classify their yams as mami and yam. Mami are yams of the D. alata species while yams of all other species found in gardens are known as yam. The farmers also differentiate yams by the hairiness on tubers (e.g., smooth or rough) and by the color of the tuber, even though they give them the same name; it is the case of stone mami and snake mami (white and purple). Some wild yams found could not be assigned to known species.

Janet Paofa of NARI’s Genetic Resources Programmes explains: “Farmer variety names refer most often to the shape of the tuber, such as bottle mami which means that the tuber shape is like a bottle. Flying fox mami means the tuber is flat and has wings like a fox. Balbal is the pidgin name of Erythrina variegata. It is called balbal due to the variegation in the leaf.”

Many varieties that the farmers mentioned during the community meeting were not found in the field. They were lost and replaced by new varieties given by family or brought from outside the village. This highlights how the diversity handled by farmers is a dynamic process.

Farmers also collect wild yams during times of food shortage or during drought periods such as the one of 1997 or 2015. Food shortage can also occur when they lose some varieties during storage due to rats or pests. Farmers mentioned that they collect wild yams during a new cycle. This most probably refers to the fact that they do not have any yams left between planting and harvesting.

Diversity to preserve and knowledge to maintain

Our analysis showed that most of the accessions collected in Konguan are diploids – that means they have two sets of chromosomes. In other areas, we’ve worked in the yams have had more than two sets. We were thus able to find a large morphological and genetic diversity in just one village level.

We conducted our work in only one village, but the findings indicate we truly located a hotspot of diversity and that New Guinea is a very important center of yam diversification. And if there is any truth to the legend of Konguan it appears the snakes married lots of women and endowed them with endless supplies of yams.

Cirad and CGIAR institutes mainly CIP, Alliance of Bioversity International, and CIAT, and IITA, have a long collaboration on root, tuber, and banana crops. Over the years, this consortia of researchers worked closely mainly within RTB and the RTBfoods projects. Such collaboration led to assess the global diversity of greater yam, the development of genomic resources and their use in deciphering the traits of importance for breeding programs, and more recently the identification of traits involved in root, tuber, and banana crops product profiles to meet the end users’ preferences.