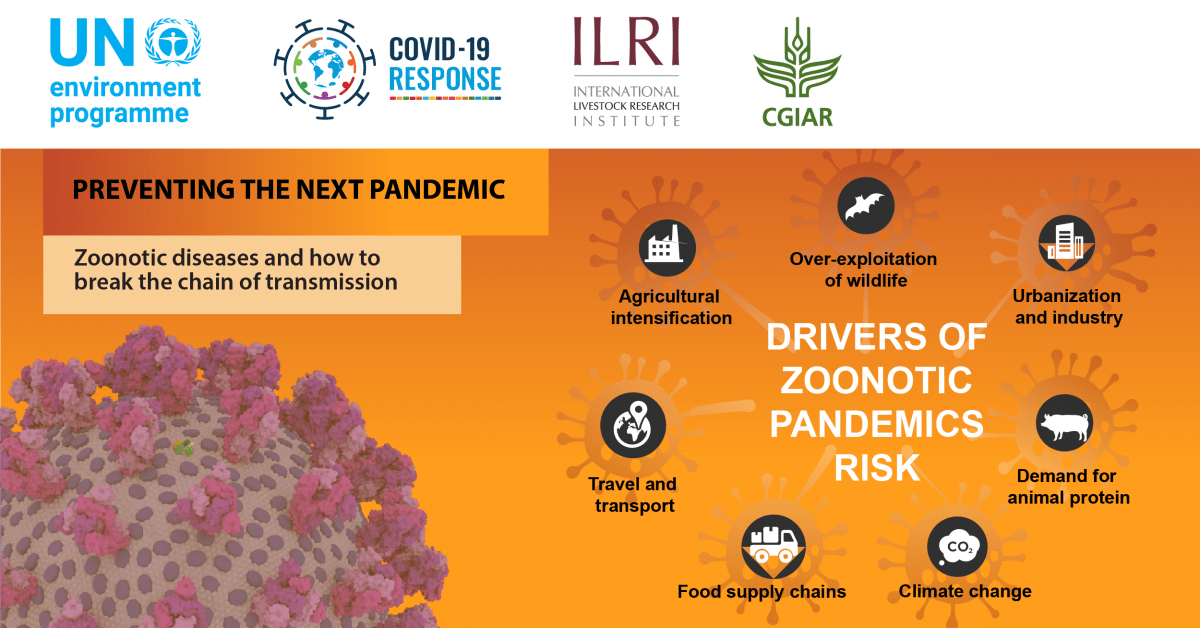 Three-quarters of emerging illnesses come from animals
and a new report identifies climate change
as a primary driver of many of them.

‘As the new coronavirus continues to turn the world upside down, crashing economies and overextending health care systems, epidemiologists and infectious disease experts are increasingly focusing on how to prevent the next pandemic, rather than solely reacting to the current one.

‘Covid-19 has already taught many lessons about response and resilience to disease, but perhaps chief among them is that if we do not significantly alter our relationship with the natural world, the next pandemic could be not just around the corner, it could be worse.

‘A report released by the United Nations Environment Programme (UNEP) and the International Livestock Research Institute (ILRI) last month makes the case for focusing on the causes of pandemics instead of treating the diseases as they emerge, an argument echoed by many in the field, including Dr. Hana Akselrod, an infectious disease specialist, and author David Quammen, who has written extensively about so-called zoonotic diseases.

‘There have been literally thousands of reports on Covid,’
according to Dr. Delia Grace Randolph,
a veterinary epidemiologist and lead author of the report,
‘but many of those are focused on the response.
We’re looking at rather more fundamental things—
why and where did this pandemic come in the first place?’

Watch this new 4-minute video short produced by InsideClimate News:
Zoonotic diseases like Covid-19 are on the rise

with telling statements from three experts:
Delia Grace, veterinary epidemiologist and
food safety expert at ILRI and the University of Greenwich,
David Quammen, author of the 2012 book
Spillover: Animal Infections and the Next Human Pandemic
and Hana Akselrod, an infectious disease doctor at
the George Washington University School of Medicine.

‘The term “zoonoses” may be new to many people, but it has been around since the 1800s. A zoonotic disease is one that transmits, or “spills over,” from the animal world into the human world. Covid-19 is a zoonotic disease, as are Ebola, HIV/AIDS, MERS, and even Lyme disease. Nearly 6 out of every 10 known infectious diseases are transmitted by animals, and a staggering 75 percent of new and emerging diseases are zoonotic in nature. . . .

The reasons for the emergence of zoonotic diseases, Akselrod, Quammen and Randolph said, are written in the way we interact with the animal world and the impact we have on our environment.

‘”When human and animal populations are both stressed, if that’s from disease, from lack of food, from crowding and from changing living conditions and ecology that’s related to a changing climate,” Akselrod said, “that kind of puts us and them together in a pressure cooker environment as far as disease transmission is concerned.”

‘Because globalization has increased international trade and travel, it’s also far easier for diseases from wild animals to spread quickly around the globe.

‘”We are disrupting wild ecosystems at a scale far beyond anything that we have ever done, and we are traveling more quickly” said Quammen. “So when a new virus gets into a human population in some remote corner of the world, it doesn’t stay there as an obscure affliction of the people in that village. In more cases than not, it gets to a town, it gets to an airport. And in some cases it gets around the world.”

‘He added, “So the spillovers that happen are happening probably with greater frequency, but they’re also more likely to turn into big events than ever before.”

Climate change and other causes of zoonotic diseases

The UNEP/ILRI report outlined seven ‘deadly drivers’ of zoonotic diseases, all of which have to do with the ways humans interact with animals and encroach into the natural world.

That list includes climate change, which Randolph said is both a facilitator and a driver of disease.

‘But global warming is indirectly related to the other drivers, as well, including increasing demand for animal protein, unsustainable agricultural intensification, unsustainable utilization of natural resources and increased travel and transportation, all of which also contribute to climate change. Others, such as the increasing exploitation of wildlife, are more likely to occur in a warming world.

‘Climate change rearranges the distribution of pathogens and the vectors that can carry a disease from one species to another, as it tends to make the world ‘wetter, warmer and more unpredictable,’ according to Randolph.

‘That can create new breeding grounds for vectors like mosquitoes, which, in 2015 and 2016, carried the Zika virus to much of North and South America, and as far away as parts of Europe and New Zealand. . . .

‘Climate change can have other impacts on zoonotic disease transmission, Randolph said. It ‘makes people more vulnerable, and more vulnerable people are poorer and less able to seek and pay for health care and to take good good care of themselves and their children,’ she said. . . .

Today, a vision of even deadlier, more frequent and, possibly, simultaneous disease outbreaks haunt people around the world, but Akselrod, Quammen and Randolph said that future doesn’t have to come into being. . . .

The UNEP report provides something of an instruction manual for breaking the chain of transmission, much of it in an approach called One Health, which essentially sees pandemics as interconnected between many layers of society—from rural villagers and veterinarians to agricultural workers and physicians—with the prevention of outbreaks requiring coordination and participation across all of them.

‘This approach can not only save countless human lives, Randolph said, but will be cost-effective in the long term. A recent report in the journal Science estimated that the cost of preventing the next pandemic would be just 2 percent of Covid-19’s economic damage. . . .’

Read the whole article by Anna Belle Peevey, Zoonotic diseases like Covid-19 are on the rise, InsideClimate News, 13 Aug 2020.

Read the ILRI-UNEP report: Preventing the next pandemic: Zoonotic diseases and how to break the chain of transmission, 2020.

Check out this web page on ILRI expertise on zoonotic diseases.