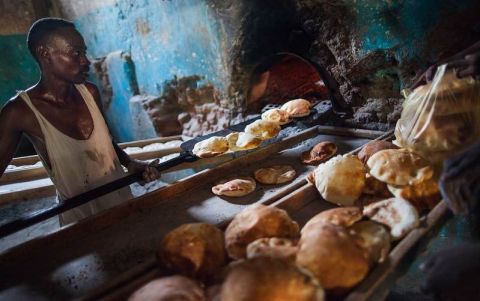 Russia’s invasion of Ukraine has disrupted agricultural production and trade from one of the world’s major food exporting regions. The war threatens to drive rising food prices still higher and create scarcity, especially for regions most dependent on wheat and other exports from Russia and Ukraine—particularly the Middle East and North Africa.

Sudan faces a uniquely difficult set of circumstances as these disruptions loom. As with other countries in the region, wheat is a key food item for Sudan, the second only to sorghum as a source of calories, accounting for 530 calories/person/day—a fifth of the estimated 2,576 total consumed daily. Only about 15% of the wheat consumed is grown in Sudan—a share that might shrink due to rising fertilizer and energy prices; the rest is imported, with a majority sourced from Russia and Ukraine in recent years (Figure 1). Adding to these vulnerabilities, prices for wheat and fuel were already spiking before the war began, compounding the risk of rising food insecurity.