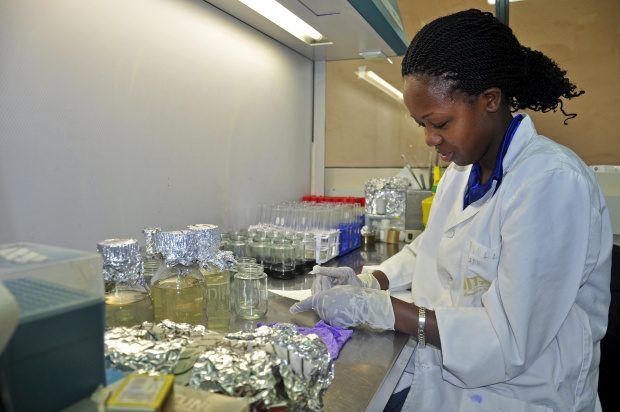 The changing climate means more extreme weather and changes in rainfall, drought patterns, and seasons around the world. These changes threaten the immediate security of smallholder farmers and others depending on natural resources to feed themselves and provide for their families. Scientific innovations and research will be essential to meeting the demands of this uncertain future. The scientific sector, however, suffers from a lack of contribution by women. According to the United Nations, women are underrepresented in the number of science degrees awarded when compared to men and, globally, only 30 percent of researchers are women.

Dr. Sophia Huyer, Gender and Social Inclusion Research Leader of the CGIAR Research Program on Climate Change, Agriculture and Food Security (CCAFS) and Director of Women in Global Science and Technology (WISAT), has spent her career advocating for gender equity in the sciences. Here, she explains the importance of women in science, the barriers to their inclusion, and how to open the field to more women and girls.

Why is it important for women and girls to be equally represented in science fields?

Scientific knowledge and advancements are crucial to meeting the sustainable development goals on time. The limited role and lack of influence women have in the sciences and policy reduces the number of innovations and scientific breakthroughs while, at the same time, limiting the perspective of policymakers. Additionally, women as a group are disproportionately affected by climate change and less likely to have the resources to recover from an extreme weather event or to adapt to prolonged shifts in weather patterns. For women involved in agriculture, their autonomy and ability to make educated, agriculture-related choices depends on their understanding and involvement in science.

Why do women continue to remain underrepresented in the science field?

The underrepresentation of women in the agricultural sciences is especially troubling given the important role they play in the global agriculture sector. Major issues include the high cost of education, internal and external preconceptions that “women don’t do science,” and family responsibilities. After all, women often remain the primary caregiver for children and the elderly and are usually responsible for managing their households. Consequently, they appear less productive on paper than their male colleagues and employers may be reluctant to hire them based on the assumption they will need more time off. These factors make it even harder for women to find employment in the scientific sector, to get funding for their research, and to rise to leadership positions once they are there.

How does your work support women and girls to use science and technology to adapt to climate change?

Research from CCAFS has found, over and over again, that women and men do not have the same access to resources and climate information services, limiting women’s ability to adapt to climate change. We’ve found that, when given the space and opportunity, women farmers flourish.

For example, a recent project in Lawra-Jirapa, located in Ghana, promoted gender recognition and involvement of women in major food insecurity objectives. From 2011 to 2017, seven climate-smart agriculture (CSA) groups were formed, giving women a place to share CSA information, assist each other, and benefit from trainings and loans. Women in these groups have undertaken research on fertilizer and crop production, no-till agriculture, and drought tolerant crop varieties.

Through these activities, women lobbied for fertilizer and expanded and improved cropping areas by applying compost and introducing tie ridging. These efforts contributed to a crop yield increase of 0.8 to 2 metric tons per hectare. Women have also received training on year-round vegetable processing and storage, cooking with soybeans, and raising seedlings. These groups have helped women improve household food security, foster unity with other women, improve their incomes, and contribute to community development.

What can the broader scientific and development community do to reduce the science gender gap?

We have to celebrate the role of women as scientists and innovators and encourage girls to think of themselves as scientists and to pursue science-based education. This includes providing women and girls with the resources they need to be successful, such as financial support, assistance in household duties, and flexible employment structures to fit their life roles. We must also reach out to both women and men at the local level to participate in technology development for improved livelihoods, energy, and agricultural production.