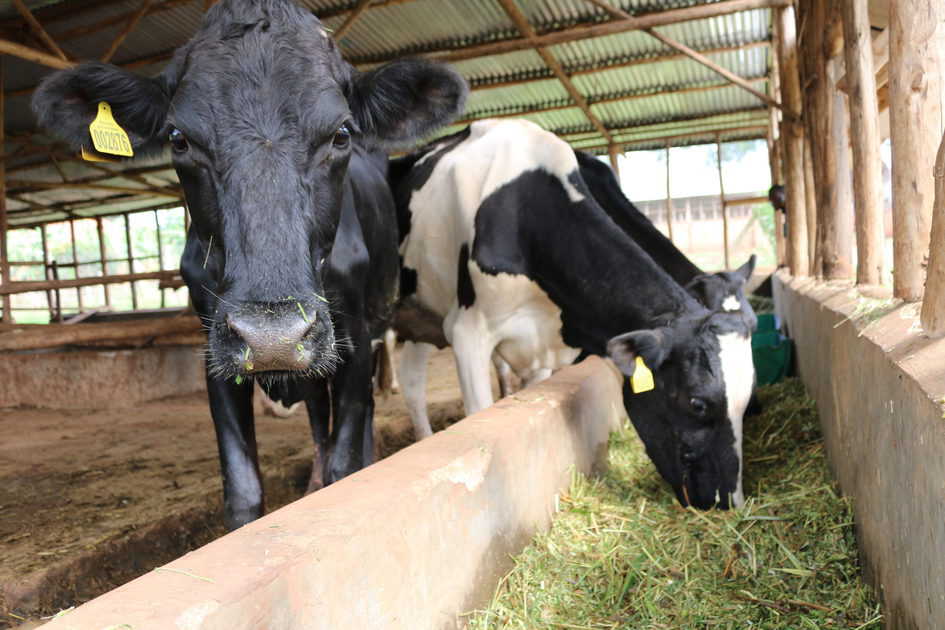 Small-scale sweetpotato farmers in Uganda have adopted innovative technologies that not only improve dairy and pork yields, but also reduce their production costs.

Sweetpotato is the third most important staple in Uganda, behind cassava and banana. Many farmers who grow sweetpotato also raise pigs or cattle. During the sweetpotato harvest, they may feed sweetpotato vines, small roots and peels to their livestock but they face two challenges. The vines and roots are highly perishable. They are no longer available two months after the harvest during the dry season, when all animal fodder is scarce. Moreover, non-livestock farmers have no use for the vines, which become an environmental hazard. Around 20% of the total sweetpotato harvest is “waste”.

However, teaching farmers to turn sweetpotato vines into silage to feed their livestock has proved very successful. The process began in the RTB-ENDURE project, implemented by the CGIAR Research Program on Roots, Tubers and Bananas (RTB). RTB ENDURE set out to benefit women and young sweetpotato and livestock farmers by promoting the production of sweetpotato silage, turning a waste product into a resource.

Silage is preserved fodder, produced by fermentation in the absence of oxygen. The resultant feed is very nutritious for animals, often more attractive than unfermented material. It improves nutrition both by being more digestible and as a result of the fermentation.

Researchers from the International Potato Center (CIP) and the International Livestock Research Institute (ILRI) developed training materials and worked with farmers and national partners to promote silage production and its use with livestock.

In Uganda, the Bavubuka Twekembe Group has embraced sweetpotato silage as a key activity. The group adopted sweetpotato silage for income generation and to encourage other youth to engage in agriculture. Members of the group, which includes 20 young women and 25 young men, have demonstrated the process to farmers and at schools and agricultural shows. With the help of motorized vine choppers provided by the project, they are able to offer a silage-making service to farmers. Over the past four years, the group has marketed 300 metric tons of high-quality forage to local farmers.

One group member, Martha Matovu, has made sweetpotato silage the foundation of a new family-run business. Matovu is a qualified mechanical engineer who used to work for Brazafric, a company that imports and sells motorized forage choppers. Her experience at Brazafric convinced her that sweetpotato silage could be profitable, and in March this year, as part of International Women’s Day, she participated in a workshop for dairy farmers to promote its benefits.

Primarily, she said, it is a source of employment. “We have given young people opportunities to work all along the value chain: from planting sweetpotato to silage making, packaging and delivery. This has generated income for everyone involved.”

The profit, Matovu explained, depends on the source of the vines. If the vines are essentially free, from one’s own plot, for example, or very nearby so that transport costs are minimal, then the profits are larger. But even if one has to buy the vines, it is possible to make a profit on selling the silage.

There is also a networking effect, with satisfied customers leading to increased business. “As we disseminate this new technology,” she said, “we have got more clients.”

So far, Matovu has bought nine motorized choppers and made silage from about 12 hectares of vines. Her main challenge now, apart from farmers whose fields are inaccessible, is finding labor to process the silage.

A crucial question is to determine the optimal amount of sweetpotato silage in the diet. With technical support from CIP, Bavubuka Twekembe Group members worked with a student from Makerere University to conduct a feeding trial on dairy cattle. They determined that giving silage at 10% of the daily feed resulted in an increase in daily milk production of about 20%. More than 10% silage in the diet promoted additional weight gain but was not cost-effective.

Similar studies revealed that the cost of feed makes up about 70% of the variable costs of raising pigs. Most farmers cannot afford to buy special feed; their pigs, fed on scraps and locally available feed, grow slowly. Under a trial in Uganda commissioned by the RTB-ENDURE project, pigs fed 60% silage and 40% locally available food grew to a marketable size more rapidly and earned a great return for the farmer.

“Silage offers so many opportunities,” says CIP researcher, Gerald Kyalo. “It reduces waste in urban markets and at the household level. It opens up business opportunities for women and youth. And it reduces feed costs in smallholder dairy and pig production systems. With farmers training other farmers, and people offering silage for sale and silage-making as a service, I’m sure we will see further adoption and scaling of this important technology.”