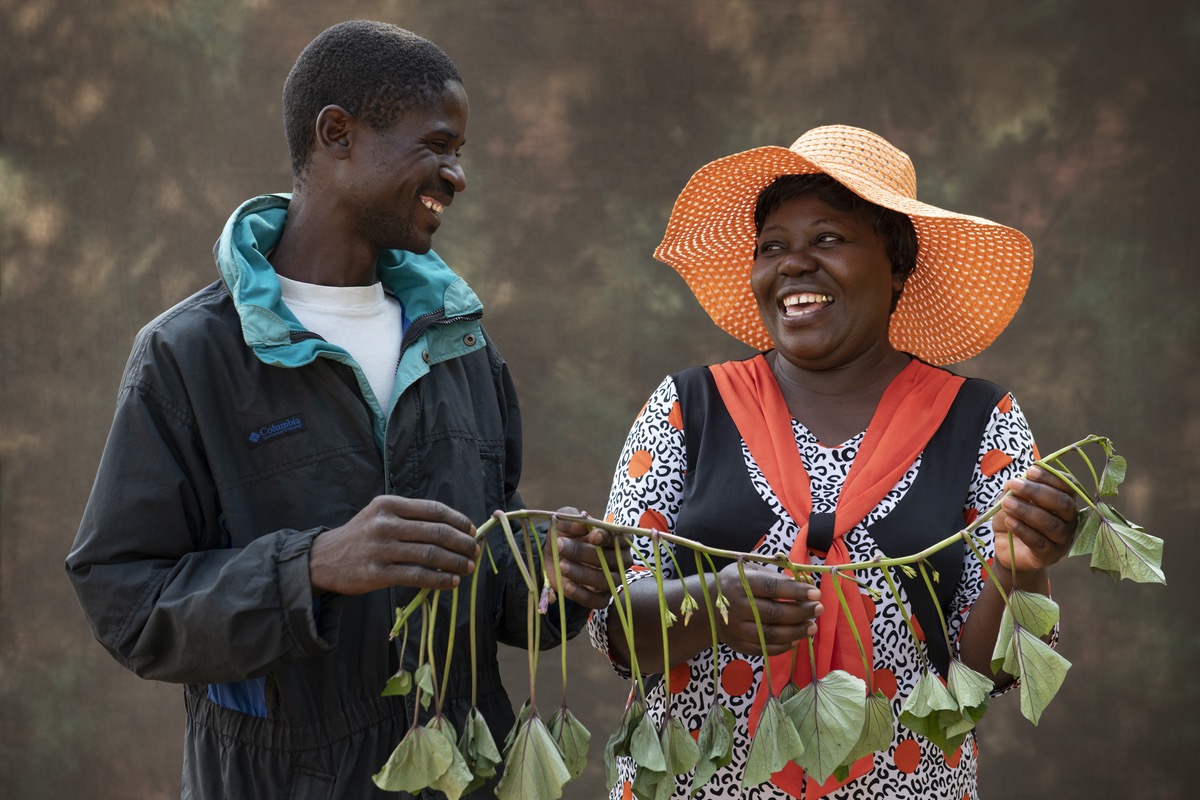 Want to reach millions? It all starts with an idea

A major global success in nutrition in recent decades started with a simple idea from young CGIAR researchers back in the 1990s: What if we could breed vitamins and minerals into the staple crops that people consume daily?

The idea was biofortification, and the lead researcher was Dr. Howarth Bouis – now a co-laureate of the World Food Prize. Dr Bouis was one of the CGIAR scientists who had the revolutionary idea that dietary quality was just as important as quantity. They proposed that staple crops could be ‘biofortified’ with micronutrients to address the ‘hidden hunger’ of deficiencies in iron, zinc and vitamin A, which can lead to blindness, disease or even death, particularly for children under the age of five.

The idea has since had global impact. There are now 290 new varieties of 12 biofortified crops – from rice to wheat, maize, bananas, potatoes and more – being grown in 60 countries, reaching an estimated 10 million farming households. Dr. Bouis, together with colleagues Drs Maria Andrade, Jan Low and Robert Mwanga from the International Potato Center (CIP), were awarded a World Food Prize in 2016 for their collaborative work on vitamin A-rich orange-fleshed sweet potato, considered to be the most successful example of biofortification work to date.

But all of this hasn’t happened overnight. Decades of research, partnership, planning and coordinated investment helped turn this ‘what if’ moment into the success story that biofortification has become today.

The importance of perseverance

One of the major factors in the successful development and uptake of biofortification has been the simple act of perseverance.

“You have to have a fundamentally sound idea that is scientifically and economically feasible – and then perseverance,” Dr. Bouis said in an interview this year. “When you try things the first time, they often don’t work and then you say, ‘OK, what did we do wrong? How can we improve this?’”

This idea of turning the research focus onto dietary quality of crops was initially met with skepticism. After all, nutritional research in developing countries up to that point had focused on the abilities of staple crops to address hunger and energy requirements in poor populations.

CGIAR’s work on biofortification was inspired by the work of another World Food Prize laureate, Dr. Nevin Scrimshaw, whose work in the 1950s and ‘60s demonstrated the impact of iron, iodine and vitamin A supplements on the health of poor children in developing countries.

Providing micronutrient supplements was an effective, but costly and complicated exercise. CGIAR scientists working on biofortification proposed that the same health impacts could be reached by breeding those supplementary vitamins and minerals into the crops that people eat every day.

A decade of research by CGIAR scientists developed the evidence needed for proof of concept, resulting in 2002 in the approval of the Biofortification Challenge Program, later renamed HarvestPlus, as part of the CGIAR Research Program on Agriculture for Nutrition and Health (A4NH). The program, along with CIP’s work on orange-fleshed sweet potato, develops and promotes biofortified crops, and together they remain the leading bodies on research and technology in the field.

The science of scaling

Biofortification work is now nearing a quarter-century – 10 years in the making, and another 15 years of implementation. We look back at the work of HarvestPlus and CIP to see what has and hasn’t worked for uptake, impact and scaling of biofortified crops.

Beyond the initial leap to take a chance on a new idea, and the perseverance to bring it to fruition, several key factors have been identified that contributed to biofortification’s success. One is partnership. HarvestPlus, CIP and many CGIAR Centers work with more than 500 partners around the world, from national governments and research institutes through to non-governmental organizations and farmers on the ground.

Another is the ability to build evidence quickly, and conduct thorough monitoring and evaluation in order to remain accountable to funders. In the pilot dissemination of CIP’s orange-fleshed sweet potato, for example, scientists spent around 50% of their resources to implement and 50% to study and document what the impact had been.

A third key factor for success has been to maintain a clear vision on how the research will have impact. This has meant looking beyond the laboratory walls, and asking farmers if they actually want to grow the new crops, consumers if they want to eat them.

Finally, none of the work would be possible without maintaining the critical mass of coordinated investment needed for research and dissemination to go ahead. Work on partnerships, monitoring and evaluation, and pathways to impact all form part of this cycle, as demonstrated success attracts renewed funding and so on.

In the decades ahead, biofortification will face new challenges in reaching maximum impact around the world. Many of these will be tied up with meeting global goals on sustainable development and tackling climate change.

Continued work in the area aims to contribute to achievement of the Sustainable Development Goals (SDGs) to “end hunger, achieve food security and improved nutrition and promote sustainable agriculture” (SDG2) and “ensure healthy lives and promote well-being for all at all ages” (SDG3), while new biofortified varieties will need to be ‘future proofed’ in the face of a changing climate.

Challenges to health and nutrition are also changing, as developing countries face the double burden of malnutrition, and developed countries show signs of micronutrient malnutrition, even among relatively wealthy populations. The need for diverse and sustainable diets remains urgent, and biofortification will likely play a complementary role in achieving this.

These challenges may seem daunting now, but as experience shows, with perseverance they can be faced.

Hear from World Food Prize co-laureate Maria Andrade and others at the side event Reaching millions: the science of scaling, to be held as part of the World Food Prize 2018 on 17 October in Des Moines, United States.