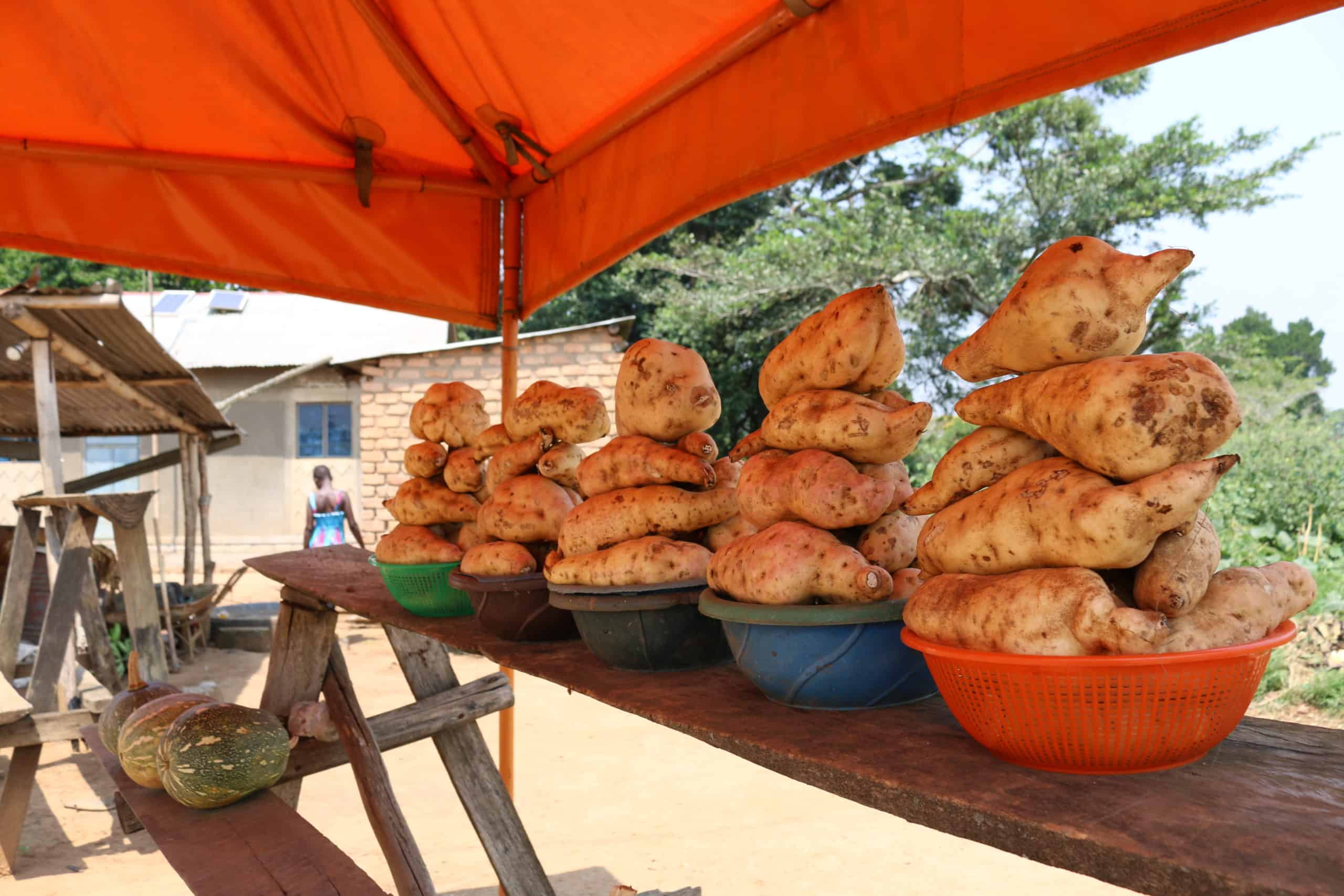 A look back at more than 25 years of work shows how innovation at all levels added a new nutritious food to diets in Sub Saharan Africa.

“No-one wakes up saying ‘I crave vitamin A today’.” That’s the essential problem of addressing micronutrient deficiency, also known as hidden hunger. A recent paper looking back over the introduction of orange-fleshed sweetpotato (OFSP) in Africa takes that as its jumping-off point.

Jan Low, now a Principal Scientist at the International Potato Center (CIP), was a postdoc researcher based in Nairobi, Kenya, in the mid-1990s. Working within CGIAR’s “Best Bet” strategy of the time, Low and others were trialing sweetpotatoes from around the world to see how they performed in East Africa. Among them were several varieties that contained large amounts of beta carotene, a pigment that gives those varieties bright orange flesh and that is also, more importantly, a precursor of vitamin A. Low had studied nutrition and was aware of the scale of vitamin A deficiency in Sub Saharan Africa (SSA), where almost 48% of the children under five suffered vitamin A deficiency. There was just one problem.

“It was a product that consumers didn’t know they needed and which initially they didn’t want,” said Graham Thiele, Director of the CGIAR Research Program on Roots, Tubers and Bananas (RTB) and Low’s co-author on the paper.

Thiele continued: “We wrote this paper to contribute to the RTB-led special issue on scaling in the Agricultural Systems journal. We wanted to pull out the drivers which enabled OFSP to become one of the most effective examples of scaling in CGIAR[1]. We identified five distinct phases of the innovation process, from the emergence of the innovative idea through scaling in 15 countries. There are important lessons for scaling of other biofortified crops and more generally in CGIAR and beyond”.

Sweetpotatoes are nothing new in Africa, having been introduced in the 16th century, although almost all the varieties are white or yellow, negligible for vitamin A. Adults given a sample of orange-fleshed sweetpotatoes imported from outside Africa rejected them as being much too watery—their dry matter content is typically around 20%. They generally prefer varieties with much higher dry matter, around 33% dry matter in Uganda. Examining the diversity in the CIP genebank, it became apparent that beta-carotene and dry matter were inversely correlated, making the breeding of high dry matter, orange-fleshed sweetpotatoes a huge priority, yet time-demanding challenge.

However, as Jan Low points out, “children loved eating OFSP—especially the easy to swallow, low-dry matter types. When your core target group loves the product, and you are addressing such a key micronutrient deficiency, we had a moral obligation to make it happen.”

Low conducted a pilot study in Western Kenya, which matched 10 women’s groups who received OFSP and advice on how to grow them with 10 groups that also received nutrition information. Only the under-fives of the women given nutrition education showed an increase in how often they ate foods rich in vitamin A. These results highlighted the importance of using an integrated approach—agriculture and nutrition.

Building the evidence base

In the early 2000s, agriculture and nutrition were much more separate than they have become during the past decade. Vitamin A deficiency was a health problem, solved in theory by distributing supplement capsules every six months to children under five. Agriculture concerned itself with yield improvements to the major staples and export crops. Sweetpotato, a crop tended by women that was predominantly for home consumption, received attention only when cereals such as maize failed.

A larger pilot study in Mozambique in the early 2000s, where an astronomical 72% of children were vitamin A deficient, brought agriculture and health together. By the end of this study, funded in large part by the Micronutrient Initiative of Canada (now Nutrition International), children in the intervention group were getting eight times more vitamin A in their diet than children in the control group. Overall, the integrated nutrition and agriculture intervention contributed to a 15% decline in the prevalence of vitamin A deficiency in young children. At the same time, a study in South Africa financed by HarvestPlus compared children getting OFSP at school with those getting a similar amount of white-fleshed sweet potato. The children getting OFSP had more vitamin A stored in the liver.

The integrated agriculture-nutrition-marketing model was then tested at scale in 24,000 households in Uganda and Mozambique. Again, solid results that showed an impact on nutritional knowledge and vitamin A intakes in young children and women, contributed to the knowledge base. As a result, major donors are investing more in nutrition-sensitive interventions. A major review of food-based approaches in 2013 noted that the orange-fleshed sweetpotato interventions had the best evidence base to date.

Meanwhile, breeders at the International Potato Center in several locations (Mozambique, Ghana, Uganda) and at Uganda’s National Crops Resources Research Institute started to breed OFSP with higher dry matter, making some use of rare orange-fleshed landraces discovered in African farmers’ fields. In addition to high dry matter, however, they also needed to breed for resistance to viral diseases and to the different growing conditions, such as drought, in different countries. As more and more countries saw the potential of OFSP, new varieties had to be bred and selected to perform well in their particular conditions. At the same time, effective “seed” systems had to be put in place. Like other roots and tubers, sweetpotato is vegetatively propagated, meaning that cuttings from vines are its “seed”.

“Seed systems for OFSP in particular and for RTB crops in general in Africa are informal and local,” says Graham Thiele. More innovations were needed.

In Mozambique, for example, the dry season is longer than in Uganda, and vines of many varieties dry out over time. Farmers normally leave some roots in the ground, which subsequently sprout when the rains come again and then use those sprouts to multiply vines for planting. However, in this traditional system, these vines are often infested with pests, especially weevils, having spent the whole dry season in the ground. The RTB Scaling Fund supported research in Ethiopia and Ghana on how best to scale out an innovation for drought-prone areas, built on traditional practice, that had been developed in Uganda. Known as Triple S technology (Storage in Sand, then Sprouting), small but healthy roots are stored after harvest in layers of cool sand. Then, four to six weeks before the rains are due, these roots, which are already sprouting, are planted out in a protected bed where they can be cared for to produce large quantities of vines for planting. On average, one root produces 40 cuttings.

“This Triple S technology, along with decentralized vine multipliers who we helped to train, has helped to ensure that farmers have access to high-quality planting material,” Thiele says.

Vitamin A deficiency is not, of course, confined to rural areas where families can grow OFSP for themselves. Another concern was to create demand in urban markets, and products to suit them. In addition to fresh roots, the project developed steamed and mashed OFSP purée, which can be added to various baked goods as a substitute for 30-60% of wheat flour, offering many benefits. Consumers like the taste of the products, which deliver better nutrition. In some countries, such as Rwanda, processing industries have sprung up to make products like biscuits and donuts with OFSP purée, and farmers appreciate having an additional market for their surplus roots. Governments welcome a reduced need to import wheat.

Building on the evidence that is accumulating steadily and taking advantage of the many innovations surrounding its development, donors and governments are supporting the scaling of OFSP. By mid-2019, the effort known as the Sweetpotato for Profit and Health Initiative had 11 organizations and 5 donors reaching more than six million households in 15 countries. The research will continue to address existing and emerging bottlenecks, and Low and Thiele stress that “there is no one-size-fits-all model for the diverse and complex conditions found in SSA”.

OFSP is probably the most successful biofortification initiative to date, as recognized with the award of the World Food Prize in 2016 to 3 CIP scientists (Jan Low, Maria Andrade, and Robert Mwanga) and Howarth Bouis of HarvestPlus. While people still may not say that they crave vitamin A, as a result of the project many more are now getting the micronutrients they need and many more will share the benefits in the future of climate-resilient OFSP.

To learn more about the history of the development and expansion of OFSP in SSA, please listen to the podcast.

This blog is based on the open-access article recently published in the special issue on scaling in Agricultural Systems.

[1] CGIAR is a global network of 15 international agricultural research institutes.