When ‘Do no harm’ is harder than ‘doing good’ 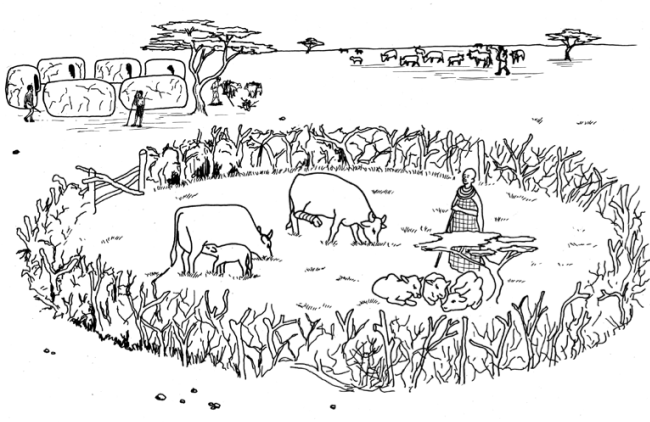 Agricultural researchers working to enhance traditional pasture conservation by Tanzania’s pastoral Maasai communities are systematically addressing gendered norms and roles to ensure that they don’t end up hurting more than helping these communities.

Across the rangelands of Tanzania, pastoral communities rely on their livestock for food security. During the annual dry season in particular, animals produce the milk that feeds the family when little other food is available. Yet feeding animal herds in this season is hard work. During these four to five months, the men move away, taking most of the household animals with them in search of fresh pasture, leaving behind only a few animals that the women will rely on to feed themselves and their children until the men (and the rains) return, months later. The animals that are left behind in the homestead are typically stock unlikely to survive the journey to and from the grazing grounds because they are pregnant, lactating, sick or injured.

Maasai have relied on a traditional Maasai pasture conservation system to feed their animals. In this system, known as ololili in Maasai, a single household, or sometimes several households working together, will fence a bit of land with thorny branches and bushes. Inside these enclosures, the natural pasture, composed of wild plants, is left to grow undisturbed during the wet season. Then, during the long dry season, when pasture grasses are spent, the women let the vulnerable stock left in the homestead by the men into the ololili to graze on the reserved green fodder for several hours a day. A typical single-family ololili of about 0.8 hectares (nearly 2 acres) is sufficient to support 5–6 cows and 2 calves throughout the dry season. With the men away, it is the women who control access by the animals to the ololili enclosures, ensuring that the animals are sufficiently fed but do not overgraze the area.

Forage scientists working with Maasai communities in eastern Tanzania consider this traditional pasture conservation system to have great potential to support food security during the dry season. By increasing the number of plants growing in the ololili scientists would support an increase in the amount of forage available to pastoral animals. Such forage intensification would enhance food security here by making more milk available to households during these yearly ‘lean seasons’. The benefits of such an intervention could be particularly big here, they reasoned, where severe dry-season forage shortages drastically reduce milk supplies every year, with animals and people alike commonly losing weight, children commonly pulled out of school for lack of fees, and cattle, goats, sheep and even camels commonly dying of hunger.