Inalienable imperative—More, and more sustainable, meat, milk, eggs and fish for more than one billion people 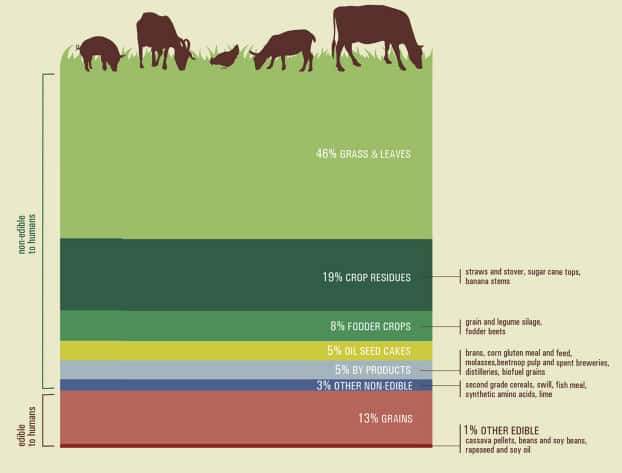 A new scientific article from the Feed the Future Innovation Lab for Livestock Systems judiciously pushes back against some of the on-going anti-livestock rhetoric appearing in Western media.

The Innovation Lab for Livestock Systems is a joint initiative of the University of Florida and the International Livestock Research Institute (ILRI). Based at the University of Florida, it is funded by the United States Agency for International Development (USAID) and the Bill & Melinda Gates Foundation (BMGF). The lab works to sustainably intensify smallholder livestock systems in order to improve the nutrition, health, livelihoods and incomes of the poor.

From the abstract
‘Globally, two billion people suffer from micronutrient deficiencies, 151 million children under five suffer from stunting, and millions more have impaired cognitive development related to poor nutrition. This is partly due to insufficient consumption of animal-sourced foods (ASF), which supply multiple bioavailable nutrients that are lacking in the cereal-based diets of the poor.

‘Yet, reports like the one recently published by the EAT-Lancet Commission solely focus on the threat of ASF consumption on sustainability and human health, overestimate and ignore the tremendous variability in the environmental impact of livestock production, and fail to adequately include the experience of marginalized women and children in low- and middle-income countries whose diets regularly lack the necessary nutrients.

‘Yet animal-source foods have been described by the World Health Organization as the best source of high-quality nutrient-rich food for children aged 6–23 months. Livestock and ASF are vital to sustainability as they play a critical role in improving nutrition, reducing poverty, improving gender equity, improving livelihoods, increasing food security, and improving health.’

The nutritional needs of the world’s poor, particularly women and children, must be considered in sustainability debates.

From the paper (please read the paper for the many important scientific works it cites, which are omitted here)
‘The notion that raising livestock and consuming animal-source food (ASF; milk and dairy products, meat, fish, and eggs) is fundamentally incompatible with sustainable development is flawed. Negative perceptions of the role of livestock in many sustainability debates arise from overestimation of the environmental footprint of livestock production, a focus mainly on overconsumption of ASF in middle-to high-income countries (MHIC) and, as demonstrated recently by Poore and Nemeck, a narrow interpretation of sustainability that focuses on one, albeit important, indicator—climate change. . . .

While the objectives of developing dietary guidelines that safeguard human and planetary health are laudable, the narrative of the EAT-Lancet Commission inadequately accounts for the existing needs of many people . . . .

The EAT-Lancet Commission report recommendations can have a major negative impact on global appreciation of the importance of ASF in diets, even though it mainly considers MHIC perspectives.

There is a danger that it could be adopted without further deliberations on the impacts in LMICs, endangering the health and livelihoods of large sections of the populace.

For the almost 800 million extremely poor people who live on less than $1.90/day and subsist on a diet heavily based on starchy foods, as well as for millions more who are slightly better off, more—not less—ASF will be required for sustainable development, as ASF provide not only calories but, more importantly, the nutrients required for achievement of human development potential.

Indeed, in many cases, ASF are the only accessible source of such nutrients for the poor. . . .

[E]fforts to achieve sustainable development must include a more nuanced understanding of livestock and consider their important implications on the lives of the poor.

‘Undernutrition causes almost half of child deaths globally and undermines the long-term health of populations and the physical and cognitive development of children. . . .

‘Based on their composition of micro- and macronutrients, as well as essential amino acids, increasing ASF consumption is likely to be more effective at reducing stunting than single nutrient supplementation . . .

‘Other research underscores the importance of meat and milk in improving the growth outcomes of children. . .  [I]ncreasing access to and consumption of moderate amounts of ASF should simultaneously be a global priority for people in areas where undernutrition remains a persistent problem, particularly for infants and women of child bearing age. Unfortunately, recent attention to and focus on the negative impact of livestock production skews this discussion.

By focusing on production systems that service the ASF demand of high income countries and the negative impact of overconsumption there, global attention and dialogue neglects the perspective and needs of the large number of people living in LMIC, among whom increasing ASF consumption could prevent stunting and improve overall health and development outcomes.

Sustainability of the planet must consider nutritionally vulnerable populations, women, and children, and the impact that low consumption of ASF has on their lives and futures—a perspective mostly missing or underrepresented in scientific analyses or heated discussions on the impacts of ASF production on climate change.

What is also missing is an understanding of how low the consumption of ASF is among the poor, particularly in LMIC, where starch-based diets are typical.

‘For example, mean annual per capita meat consumption in the bottom four meat-consuming countries (Sudan, India, Bangladesh, and Ethiopia) is less than one-thirtieth of that in the top four (Brazil, Uruguay, Australia, and USA; Fig. 1). . . .

‘In 2015, the United Nations adopted a resolution to transform the world by 2030 by achieving 17 ambitious Sustainable Development Goals (SDGs). These include no poverty; zero hunger; good health and wellbeing; good-quality education; gender equality; decent work and economic growth; affordable clean energy; and climate action, among others. . . .

It is important to note that livestock are indispensable for the achievement of the SDGs, partly because they play an essential role in the lives of the poor. . . .

‘Poverty elimination is highly unlikely without attention to the livestock sector, the world’s fastest growing agricultural sub-sector, making up five of the ten highest value commodities in the world and accounting for 40%, on average, of the global agricultural GDP in developing countries. Increasing food security and eliminating hunger without livestock would be an even greater challenge than it already is for over half of the world’s poor people who rely on the sector for subsistence, as well as income, insurance, and food. Furthermore, livestock production allows food production on 57% of the earth’s land that cannot be used for crop production; and livestock production supplied 25% of protein and 18% of calories consumed globally in 2016, both of which are required for nutritional security. Livestock provided draught power.or traction for about a third of farmers in developing countries, though a more recent estimate is 50% of the world’s farmers. Livestock manure provides organic fertilizer for over 50% most of the world’s croplands, converting waste products into inputs for production of high-value food. The manure plays an important role in replenishing soil organic matter, which is critical for maintaining soil health and quality and hence sustaining crop productivity and restoring degraded soils. For millions, manure also serves as an important building material and an income source when sold for fuel.

Achieving the SDG target for gender equality without attention to livestock production would be difficult, as nearly half of the world’s farmers are women, and livestock is especially important for those female smallholder farmers who do not own land.

‘Animal source food production contributes meaningfully to goals for a sustainable food system, by converting millions of tons of agroindustrial by-products that cannot be consumed by humans into livestock feeds, concomitantly reducing waste and environmental pollution and increasing human-consumable food.

It is critical to note also that globally, only about 14% of the feed dry matter ingested by livestock is edible to humans, based on recent FAO data, and the figure is likely even lower in several developing countries where ruminant livestock subsist mainly on pastures or crop residues.

These aspects are often overlooked in discussions about livestock and sustainability, such as in the recent Science article that received global attention and unfortunately catalyzed widely-circulated non-scientific media calling for less ASF consumption in order to save the planet. . . .