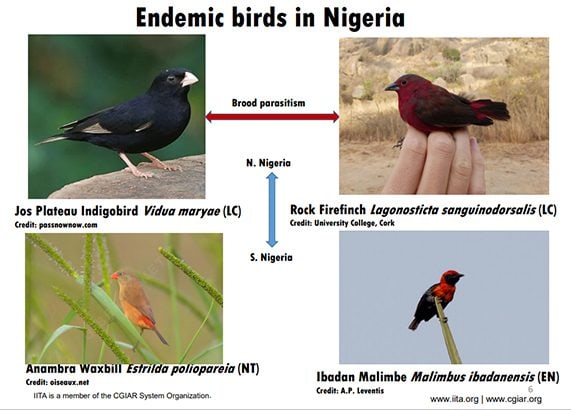 The Ibadan Malimbe, range-restricted and endemic to Ibadan, is an important bird for conservation. Its home, food, and climatic habitat are in the forest areas in Ibadan alone. Between 1994 and 1996, the International Union for Conservation of Nature (IUCN) listed it as critically endangered due to its rarity and closeness to extinction. It was later listed as endangered, as more birds were spotted over time.

IITA Ibadan campus, sitting on a 1000 ha and hosting about 350 ha of forest dedicated to biodiversity conservation, is home to the Ibadan Malimbe. This beautifully unique bird is the most threatened of the four endemic birds in Nigeria. The Jos Plateau Indigobird and the Rock Firefinch are range-restricted to the north, and the Anambra Waxbill and the Ibadan Malimbe to the south.