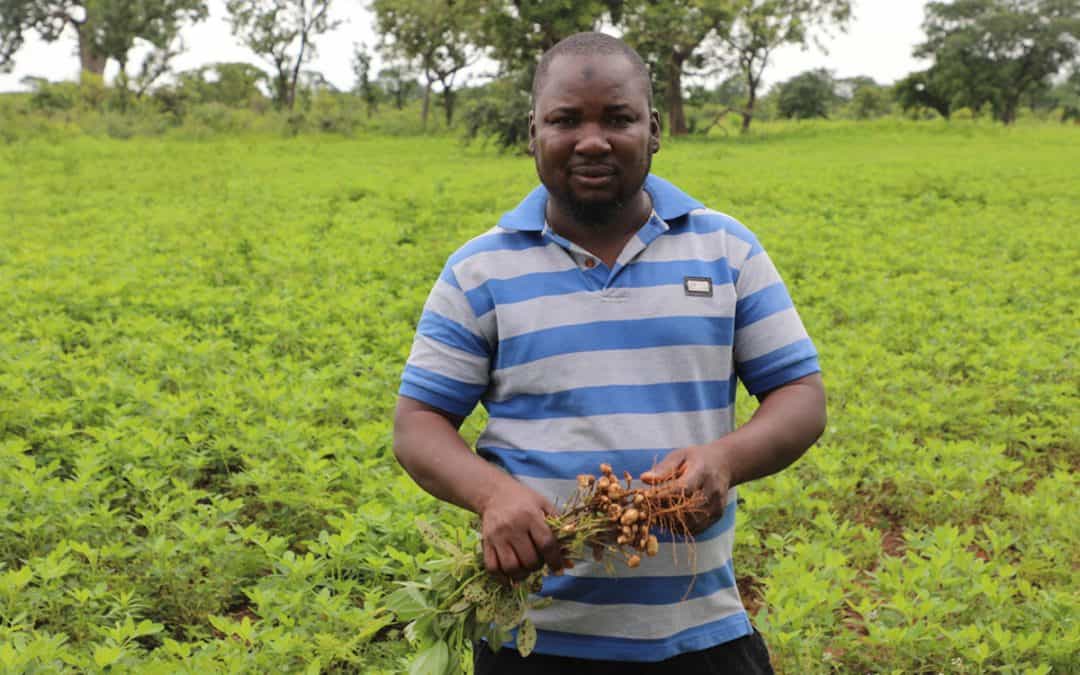 Access to quality seed remains a big challenge for farmers in Africa. With increasing drought situations and deteriorating soil quality, especially in the Sudanian and Sahelian zones, improving access to seed of climate-smart varieties is part of the solution. Spurred by a desire to “fix the problem” at least in his village, Mr Khalid Abukari Giwah left his government job to start a seed production venture. Currently, his company fosters 10 outgrowers (contract farmers) for seed production of improved groundnut and cowpea varieties that were disseminated through the Tropical Legumes project.

Welcoming field-monitoring staff from the AVISA project in Ghana, Mr Giwah shared memories of growing up on a farm. “In my village, we used to grow lots of groundnuts and cowpeas for consumption, but with rains becoming scarce and the soils less fertile, farmers need to labor hard for little. I told myself that something needs to be done to fix the problem,” says Giwah, who started Asawaba Farms Limited in 2015. The company is located in the village of Tatuani, which is about 15 km from Tamale city in Northern Ghana.

A certified seed company in Ghana must meet many criteria including having the technical competences and the right facilities for producing seed of the crop of interest. After, going through the required checks by the Ghana Seed Inspection Division, Asawaba Farms produced two varieties of groundnuts (Samnut 22 and Nkatiesari) in its first year of certification.  The improved seed was supplied by the company through CSIR-SARI, Ghana’s national agricultural research institution. According to Dr Richard Oteng-Frimpong, groundnut breeder at CSIR-SARI, the aim was “to recommend climate-smart groundnut seed varieties that are disease tolerant and high yielding for multiplication”. This collaboration allowed the company to produce and sell quality groundnut seed in Ghana markets.

In 2018, two varieties of cowpea foundation seed (Wangkae and Kirkhouse Benga) were cultivated by the company. Both are high-yielding and resistant to aphids and Striga.

Asawaba Farms works in partnership with a network of smallholder farmers in the Northern and the Savannah Regions of Ghana. Farmers are chosen as seed producers based on their willingness, commitment and crop management skills.  Some farmers among the outgrowers are selected and trained as seed producers in their respective communities. They then serve as sources of improved seed to other farmers in the remote farming communities in Northern Ghana. Participant farmers are also trained to understand the difference between grain and seed production. They are trained on handling seed before planting, preventing open pollination, identifying off-types and overall handling from farm to market.

To produce certified seed, Asawaba Farms provided a range of services to its 10 outgrowers. The company ploughed the fields, provided herbicides and procured foundation seed for the outgrowers, which they paid for after harvest. The company also provided other services including tractor services and inputs to other smallholder farmers in the farmer organization.

Ms Anti Adiza (42) from Tatuani, who started groundnut seed production (Samnut 22) in 2018, says she had never seen such yields in her life. “With support from Asawaba Farms, my production is over 200% higher. Some of the new things I have learned is how to store seed and the importance of identifying and removing off-types in my field. I gave several farmers a kilo of high-yielding varieties to test on their farms before supplying it to them,” she says

Benefits to all farmers

The company enabled farmers in the village of Tatuani and the Northern and the Savannah Regions of Ghana to address the problems of Striga and poor soil by using improved seed varieties. In early 2018, farmers benefiting from the company’s programs mobilized themselves and expressed interest in becoming seed producers. Following this demand, the company decided to work directly with these farmers. “We want the benefit to be two-way. So, selected farmers became seed producers too,” says Giwah.

The company is also working with more than 300 smallholder farmers (220 male and 156 female) in the cultivation of groundnut, cowpea, maize, rice and soybeans. “In the coming year, we have the objective of becoming a leader in the groundnut seed value chain,” said Mr Giwah.

Asawaba Farms Limited works with state institutions and Non-Governmental Organizations, including the Ministry of Agriculture and District Assemblies, USAID Advance project and Premium food. The company is also member of Northern Out Growers Business Association (NOBA) and has recently joined the Seed Producers Association of Ghana (SEEDPAG).  Funding of the company is from savings of sales of farm produce and equipment support from USAID/Advance project.