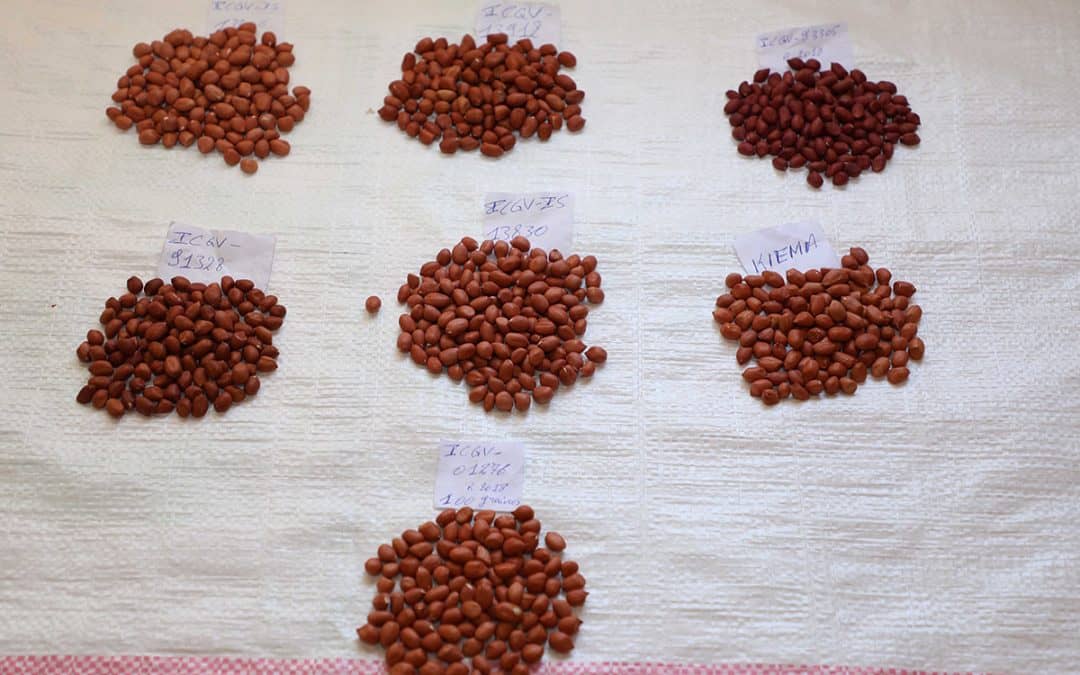 More than 20 years after the last groundnut seed variety was registered in the seed catalog, the groundnut breeding program in West and Central Africa is set to be enhanced through the registration of seven improved groundnut varieties in Burkina Faso. The registration in the West Africa Variety Catalog 2018 was achieved by the Institute of Environment and Agricultural Research (INERA) through its groundnut improvement program in collaboration with ICRISAT.

Of these varieties, ICGV 93305 (Miou Paale) and ICGV 91328 are aflatoxin-tolerant varieties. KIEMA, ICGV-IS 13830, ICGV-IS 13912 and ICGV-IS 13806 are drought-resistant. According to Mr Sy Appolinaire Traore, a researcher at INERA, these last four varieties are quite appreciated for their ‘slightly large seeds’. The last registered variety (ICGV 01276) is resistant to foliar diseases. It is a medium-duration and ‘stay-green’ variety.

“All these varieties are high-yielding. A variety is only proposed for registration when the yield is higher than 1.5 t/ha. Six of them are of short-duration cycle (90 days) and one is of medium duration (105 days),” explained Sy Appolinaire.

This major breakthrough is the result of more than 200 demonstrations and field days conducted with farmers and seed companies in four major groundnut production zones in Burkina. “When farmers were asked to choose their preferred varieties, they paid particular attention to morphological development of plants. This random selection also contributed in evaluating the productivity of the varieties based on criteria such as the number of pods by plants, the pods and seeds size (marketability), the percentage of maturity, the color of the seeds and haulm production by variety,” said Mr Sy.

For Mr Tarpaga François, a farmer in the village of Daltenga, it was easy to choose a variety. “I chose the drought-tolerant varieties because the rainy season is short in our area with frequent drought. Earlier, my yields were around 700-800 kg/ha. With INERA’s improved varieties introduced by the TL III project, the yield reached between 1300 to 1500 kg/ha,” he said. With this increase in yield, Taparga was able to sell part of his produce. In 2018, he invested in livestock and is now using his groundnut haulms to feed them. “With these haulms, I saved more than FCFA 700,000 (US$ 1,195) during the dry season which otherwise would have gone for livestock feed expenses,” he says. In order to modernize his farming activities, using the earnings from the sale of his seeds and oxen, Taparga bought a new tractor, for FCFA 10 million (US$ 18,000).

In addition, Tarpaga was able to help a group of women in his community to start their own seed production. The women’s group was produced quality seeds and used the proceeds of their sale to buy goats and sheep, and to support some household expenses, including school fees. There is now a growing interest among other women to engage in groundnut production.

Mr Taparga with his family and their livestock. Photo: Mr SA Traore, INERA

Another impact of the production of improved groundnut varieties is witnessed in the village of Sangha in the Eastern Centre Region of Burkina Faso. “I earned about FCFA 500,000 (US$ 855) from a year’s groundnut produce. Each bag of 100 kg was sold at FCFA 30,000 (US$ 50). Then, I bought a motorcycle at FCFA 400,000 (US$ 684) and with the remaining money I helped my husband pay our children’s school fees,” says
Mrs Marguérite Koara.

Building on the experience of past projects to strengthen the national seed system, the registration of these varieties in the West Africa variety catalog is not only a success for scientists but also a breakthrough and big relief for groundnut seed system in Burkina Faso. The TL III project ended in June 2019. The Accelerated Varietal Improvement and Seed Delivery of Legumes and Cereals in Africa (AVISA) is now consolidating his impacts among the target communities.

For more on ICRISAT’s work on groundnut, click here.