Governing blue carbon – and all that it entails 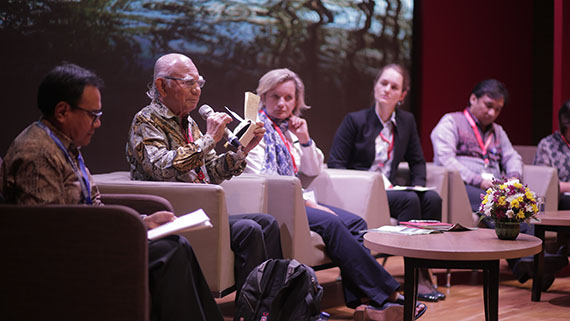 Indonesia – The banks of the Ciliwung River are not grounds for Jakarta’s most desired real estate, as is the case for other urban rivers. Wooden shacks piled against one another line the Indonesian capital’s waterway, which then hurdles through diesel-spewing boats and islands of plastic rubbish to meet the Java Sea rather than easing through mangroves and clear waters. It’s little wonder as to why Jakarta’s coastline is eroding, and the city is notoriously sinking.

Indonesia has nearly 100,000 kilometers of coastline, home to 23% of the world’s mangroves, as well as peatlands, seagrass meadows, coral reefs and other coastal ecosystems that, at their best, are something of the country’s Great Wall past and present, serving both as a first line of protection and a major source of income generation. These seagrasses and mangroves store at least 17% of the world’s ‘blue carbon’ – carbon stored in coastal ecosystems, at a density of up to four times that of terrestrial forests. This situates Indonesia’s coastal ecosystems as crucial carbon sinks, as well as major potential dangers for the national and global climate, both environmentally and economically.