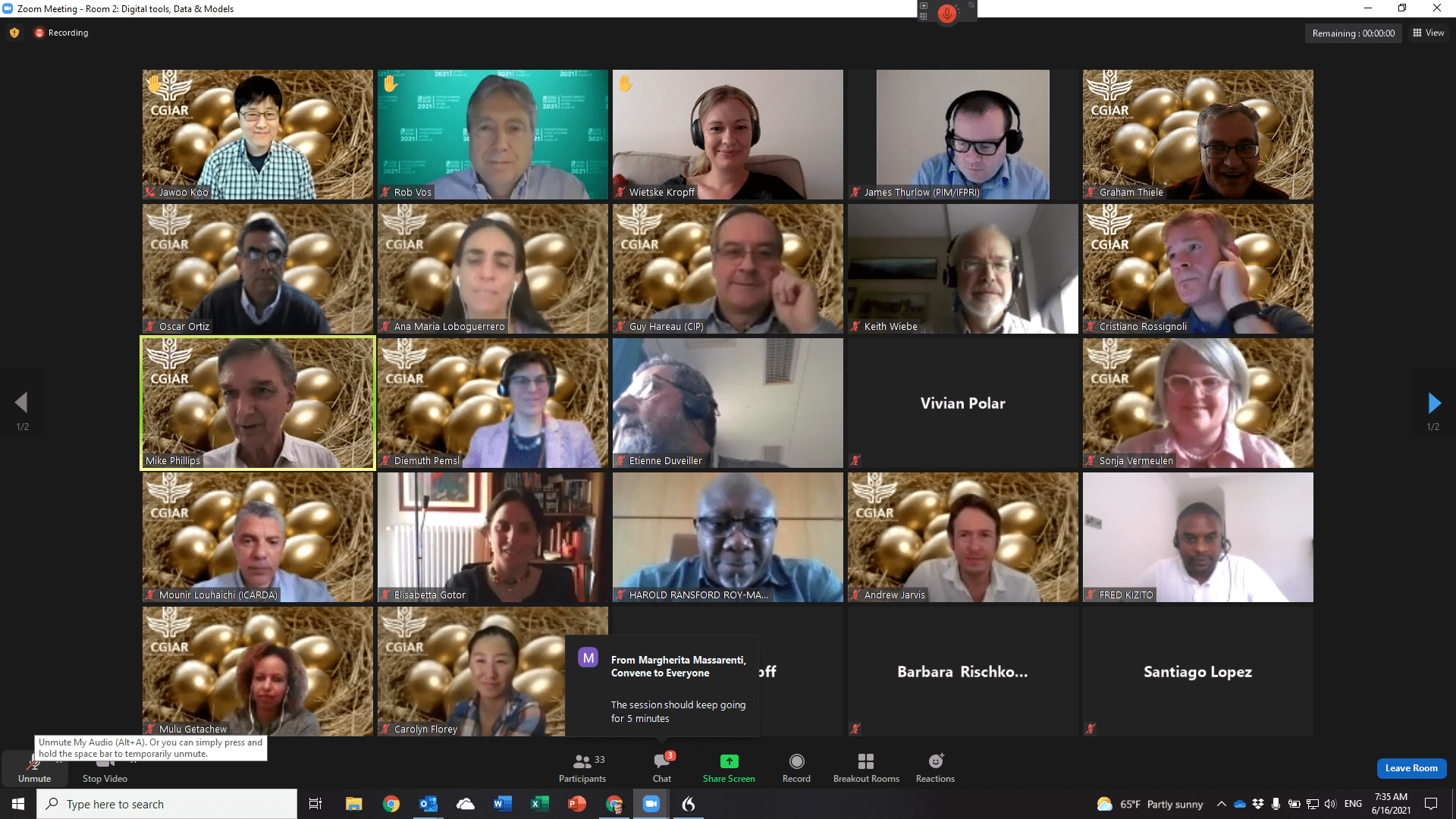 As One CGIAR takes shape it becomes critical to build on the progress already made. Participants in the virtual Golden Egg Transfer Marketplace event held in June 2021 reviewed 36 major research assets known as golden eggs and addressed their suitability for inclusion within the One CGIAR Initiatives.

The participants in the June meeting reviewed 36 golden eggs and discussed their applicability, their stage of maturity, and their potential for developing synergies across various Initiatives.

“We are thrilled to see that the concept of ‘golden eggs’, which RTB pioneered, is now gaining traction across CGIAR,” said Graham Thiele, RTB Director. Golden eggs are compilations of collective knowledge gathered over the years that are developed into a set of shareable and useable assets. “We coined the term ‘golden eggs’ to describe these assets as it captures both their fragility in a change process and the notion of continued life with appropriate nurturing.”

To date, RTB has developed 13 golden eggs and now three of those that follow have been selected for review in the Golden Egg Transfer Marketplace:

Crop breeding has usually focused on productivity traits such as higher yield or drought tolerance which address major production challenges. However, other traits also shape consumer preferences, which may differ between men and women. Factors such as land tenure and the gendered division of labor associated with the crop can have a significant influence on trait preferences and ultimately on varietal adoption.

In her presentation at the marketplace event, Polar stressed how using these tools can ensure that gender is addressed in a systematic and replicable process that considers both potential benefits and negative implications of traits selected for breeding. “Going forward, we will need to see how these tools can be adapted across breeding programs, and elsewhere including the newly launched Excellence in Agronomy 2030 initiative, and in programs where there are more indirect criteria such as in feed for livestock,” said Polar.

Scientists need to know which research topics to address first, and which solutions are more likely to have a positive impact on food security and livelihoods. But how do they make those priorities? “We’ve developed an approach that can help to direct limited funds to research areas with the greatest payoff and increase efficiency and transparency of resource allocation,” said Guy Hareau, an agricultural economist with the International Potato Center and presenter of the golden egg on the Strategic research priority assessment toolkit. Guy and his colleagues have developed a seven-step analytical framework for assessing research priorities.

Participants at the Transfer Market showed keen interest in extending the toolkit beyond specific crops and applying it on a national level. “The approach is very suitable for country-level analysis and the major audience we had in mind when building the toolkit webpage were national partners,” said Guy. “National agricultural systems can use the framework and tools for their own prioritization efforts.”

Initiative Design Teams recognized that One CGIAR would need structured, science-based tools and guidance for bringing innovations to larger audiences and beneficiaries. RTB’s Scaling Readiness golden egg fits the bill. “Our stepwise process and evidence-based approach were designed and tested with RTB and other CGIAR research programs and projects,” says Marc Schut, an innovation and scaling scientist with Wageningen University and CGIAR, and representative of the Scaling Readiness team. “Scaling Readiness has been used across the broad range of CGIAR technological, capacity development and policy innovations.”

Schut believes that Scaling Readiness will work across the three CGIAR Action Areas. “It is critical that the CGIAR Initiatives try to be as explicit and user-centered as possible about what they are developing and scaling, and how that is supposed to contribute to the Sustainable Development Goals,” said Schut, who recently co-authored a paper on the subject. “Scaling Readiness is designed to help Initiatives identify key bottlenecks for innovation and scaling, and to design, implement and monitor strategies to overcome such bottlenecks.”

The 36 golden eggs selected for the Transfer Marketplace, and others are still to be considered. “One CGIAR presents new challenges so we will tweak our golden eggs to ensure that they will adapt well to the new environment and further incubate our remaining ten golden eggs so they can be transferred effectively as well,” said Thiele.

The experience gained in the initial Transfer Marketplace proved valuable as a way of efficiently connecting buyers (Initiative Design Team leads and team members) and sellers (CRP and Platform leaders and scientists) of the golden eggs. Based on this experience, a similar process can be followed for the other 40 golden eggs that received some interest but didn’t make it to the initial Transfer Marketplace.

Posters on the golden eggs