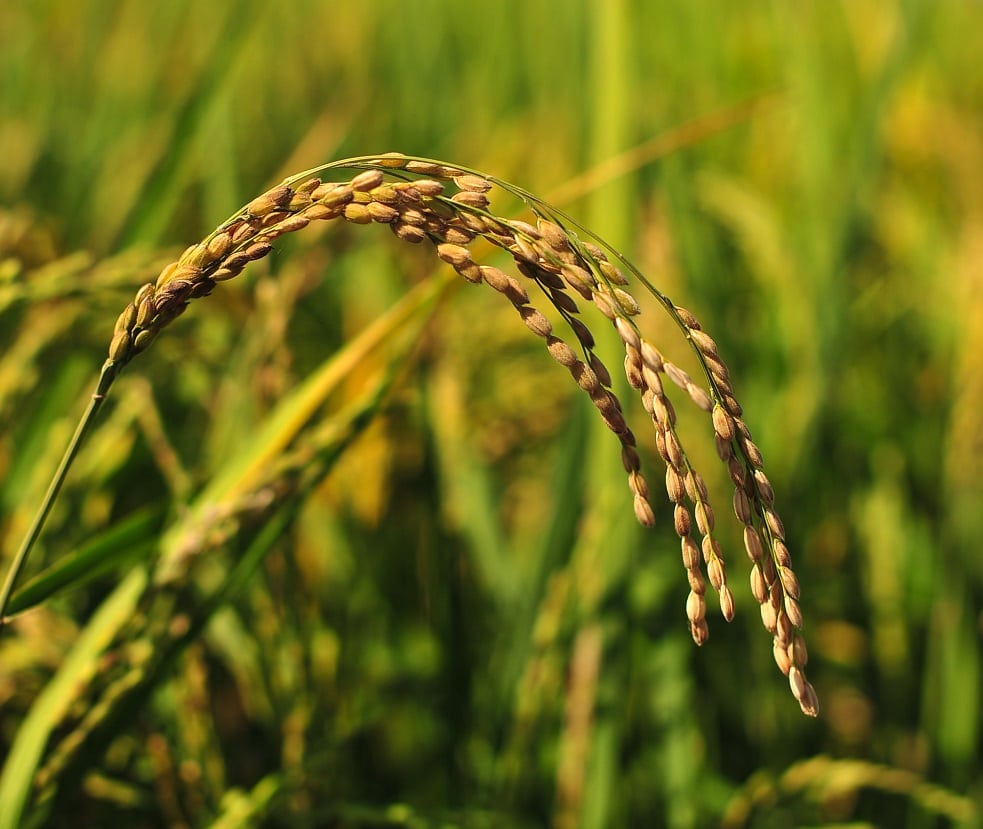 In the past 29 years, the Germplasm Utilization Value Added (GUVA) project ihave delivered six released varieties that are resistant to some of the major diseases and pests to ensure high-yield stability in the tropics. These helped expand the cultivation area for temperate japonica to tropical regions. GUVA’s future work will focus more on highly efficient molecular breeding for yield stability and potential, enhanced resistance to biotic and abiotic stresses, and high grain quality in order to develop superior japonica rice varieties with improved adoption and enhanced genetic gain in tropical regions.

Maligaya Special 11 (MS11) is one of the japonica cultivars developed for the tropics. MS11, released in the Philippines in 2008, is a semidwarf, early-maturing variety that has the typical characteristics of japonica grain—short rounded shape, low amylose content, and low gelatinization temperature. (Photo by Chirs Quintana, IRRI).

.
Japonica is a group of rice varieties grown extensively in the cooler zones of the subtropics and in the temperate zones.  A subspecies of Oryza sativa L., it is mostly cultivated in in China, Japan, South Korea, Italy, Egypt, Russia, and the US (California) where there are distinct seasonal changes in temperature.

Collectively, they are called temperate japonicas as opposed to tropical japonica rice varieties (formerly called javanica), such as Tinawon and Unoy, grown in the high-elevation rice terraces of the Cordillera Mountains in the Philippines.

Because of their unique tastes and cooking attributes, temperate japonica varieties like Arborio, Calrose, Carnaroli, Koshihikari ,Vialone Nano, Yamada Nishiki, and Forbidden (black) rice are considered as premium products.  Their sticky texture and high-grain quality them suitable for iconic cuisines like sushi, risotto, paella, and garaetteok. Temperate japonica rice is also the main ingredient in sake.

Not surprisingly, temperate japonica grains fetch high prices. The limited supply of japonica rice is another factor that is driving a stronger demand. There is not enough Japanese rice to meet the demand from Japanese restaurants across the world, according to Kyushu University professor Shoichi Ito. This has led some Japanese farmers to consider growing the rice in other countries as an option.

In Southeast Asia, the temperate japonica rice market is still small and very specialized but the demand for it is increasing.  With its premium price, these varieties have great potential for boosting the income of rice farmers in the region.  Japonica rice cultivation also emits less greenhouse gas (GHG) that could help bridge the need to produce more rice for food security and reduce GHGs in global rice cultivation at the same time.

File photo: Dr. Kyung-Ho Kang, a former rice breeder at IRRI, examining MS11. MS11 is a cross between two varieties from Korea, namely, Jinmibyeo and Cheolweon 46. Jinmibyeo has high grain quality, while Cheolweon 46 has high resistance to pests and diseases in tropical conditions. MS11 can produce up to 4.9 tons per hectare, 9% higher than IR 72, a superior tropical variety. (Photo by C, Quintana, IRRI)

.
The aim of the GUVA project is to develop temperate japonica varieties with high yield potential and desirable agronomic characteristics that are adaptable to the tropics. Rice breeders at GUVA envision that such varieties can enable farmers in tropical regions to tap the lucrative temperate japonica market.

Rising average global temperature is projected to seriously affect temperate japonica rice production because of its sensitivity to heat. In South Korea, a study projected that if greenhouse gas emissions continue to rise throughout the 21st century, yields of Korean rice varieties were expected to drop by almost 14% within the next 20 years.  If temperature keeps rising the country’s rice yields could fall by as much as 40.1% at the end of this century, according to the National Institute of Crop Science’s Crop Production and Physiology Division.

The GUVA project will also provide robust genetic resources of temperate japonica rice that can withstand any drastic consequences of climate change as breeding materials for rice-cultivating countries with temperate climates.

In the past 29 years, researchers at GUVA have delivered six released varieties that are resistant to some of the major diseases and pests to ensure high-yield stability in the tropics. These helped expand the cultivation area for temperate japonica to tropical regions.

Information on the performance of more recent cultivars in farmers’ fields is still lacking. This is most probably due to multi-faceted problems associated with seed dissemination to seed producers and farmers, little access to more comprehensive data for the recent high-yielding varieties such as Japonica 7, and the grain quality of temperate japonica varieties that may not meet farmers’ preferences.

.
In addition, the following concerns still need to be addressed for the further development of temperate japonica varieties adaptable to the tropics: (1) enhancing yields in the wet season; (2) introducing resistance to biotic and abiotic stresses; and (3) improving grain quality by alleviating PHS, short seed longevity, and grain breakage.

This will be achieved by combining the conventional breeding process and new breeding tools such as trait genotyping for improved parental selection, marker and genomics-assisted breeding, and speed breeding.