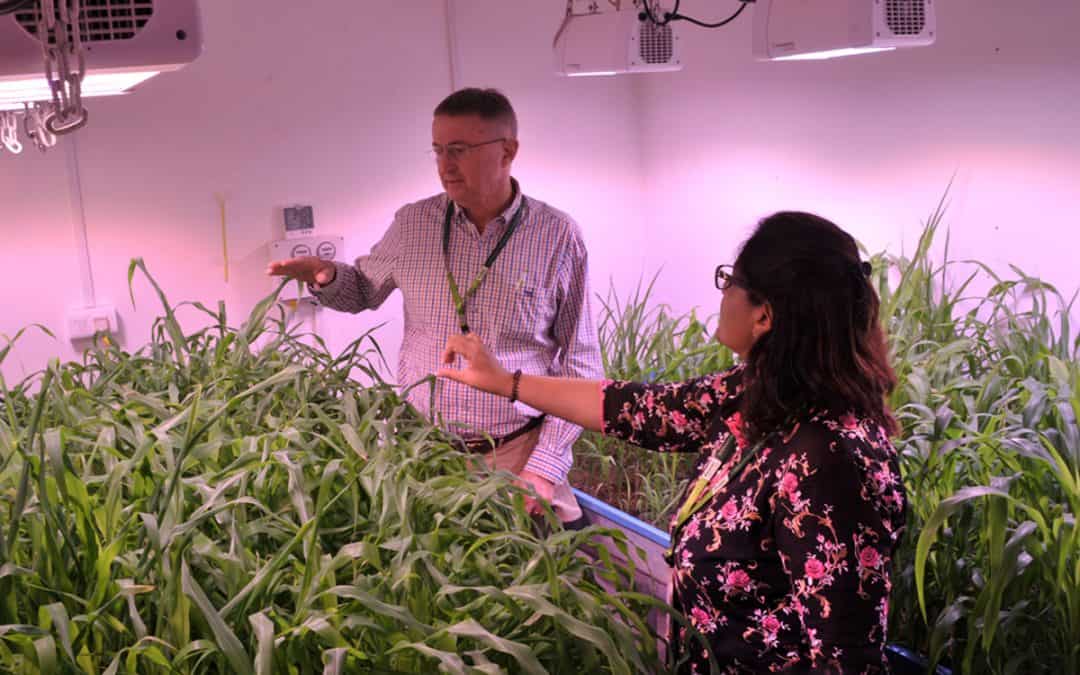 Hyderabad, 14 February 2020: Efforts to modernize crop breeding took a giant leap today with the unveiling of ICRISAT’s new facility, which is projected to significantly lower time and cost of crop varietal development. The state-of-the-art facility is a first for any public sector agricultural research institution.

Called RapidGen, a moniker for Rapid Generation Advancement, the facility will accelerate plant lifecycle in light-, temperature- and humidity-controlled conditions. Presently, breeding a new crop variety takes about a decade or more, with six or seven years spent in seasonal generational advancements to arrive at the elite lines that go for testing and release as varieties. RapidGen will shorten the six-seven year window significantly. When used with the full suite of breeding acceleration techniques, RapidGen can reduce the breeding cycle by an estimated 40% for most crops.

“Climate and exponential population growth have to be considered for rapid development of improved food crops is essential. But we also need to look at what has been achieved to sustain food security and achieve nutrition security,” said Dr Peter Carberry, Director General, ICRISAT. “With facilities like RapidGen, crop breeders can overcome the

limitations of seasons and photoperiod to develop the elite generations in fraction of the time and cost it would take if done in fields.”

RapidGen, is comprised of three installations—testbed optimization chambers, lighting controlled greenhouse bays, and a temperature-regulated light deprivation polyhouse. Depending on the crop and the requirements of breeding programs, researchers can scale-up their activities in either controlled greenhouse bays or in the polyhouse facility after using the testbeds for protocol development. Largest of the three installations, the polyhouse can be used for over 30,000 crosses in one go. Each of the installations are equipped to finely regulate temperature, light and humidity.

“Every crop is unique in the way it responds to a set of environmental parameters. We have to mimic the right set of conditions within these closed installations to convince a plant to grow faster at high density and to reproduce quickly. These set of conditions, which we call ‘recipes’, are crop specific-protocols to hasten the crop cycle while producing healthy, viable seeds,” said Dr Pooja Bhatnagar-Mathur, Theme Leader at ICRISAT.

Dr Kiran K Sharma, Deputy Director General-Research, ICRISAT, informed that protocols for chickpea, groundnut, pearl millet and sorghum are already in place. “Protocol development is the first step before a breeding program can take advantage of facilities like RapidGen. With their development, our partners and collaborators, both public and private, can integrated these modern techniques into their breeding programs.”

ICRISAT is collaborating with several agricultural research institutes under Indian Council of Agricultural Research (ICAR), State Agriculture Universities and industry partners to mainstream rapid cycling of the crops for which protocols have already been standardized.

ICRISAT scientists at the polyhouse after its opening on Friday. The facility can be seen with the canopy folded and under naturally lit conditions.

“RapidGen is a case of many firsts, including a first for CGIAR, the group of research institutions of which ICRISAT is a part of, and which is the world’s largest agriculture research system striving to ensure a resilient, food and nutrition secure future,” he further said.

RapidGen’s infrastructure took almost a year to build and is supported by major donors through the CGIAR initiatives— Excellence in Breeding (EiB) Platform, Crops to End Hunger (CtEH), and Grain Legumes and Dryland cereals (GLDC)—and the Accelerated Varietal Improvement and Seed Delivery of Legumes and Cereals in Africa (AVISA). Industry partner Corteva Agriscience provided the technical and engineering support for setting up these futuristic facilities required for scaling up crop breeding pipelines.