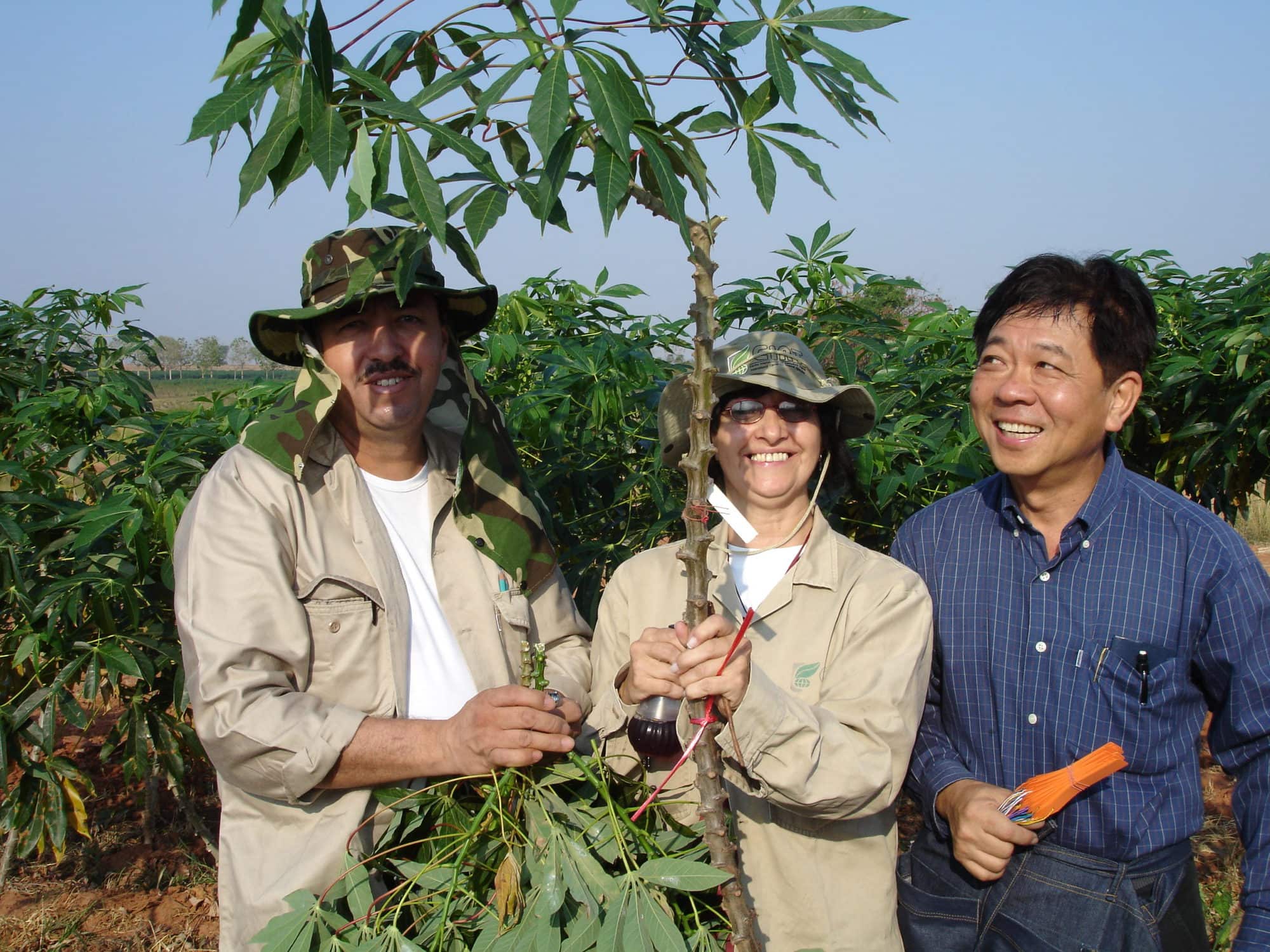 Kasetsart 50 is a progeny that would make any parent proud. KU 50, as it’s called, is a high-yielding cassava variety that is now grown on over one million hectares in Thailand and Vietnam and is one of the most popular cultivars worldwide. It is well adapted to a wide range of growing conditions, has a low impact on soil quality, and provides a high starch content. And now it is a parent itself and has been used in crosses to produce numerous cassava hybrid cultivars.

But KU 50 wasn’t plucked from obscurity in a farmer’s field. It is the result of a careful and methodical public breeding program involving Kasetsart University and the Department of Agriculture in Thailand and the Alliance of Bioversity International and CIAT (the Alliance).

“KU 50 encapsulates the public breeding work done in cassava over the past 50 years,” says Hernán Ceballos, a cassava breeder with the Alliance. “It shows through cooperation we can achieve the outputs that we strive for as breeders in terms of genetic gain, economic impact, and sustainability.”

In a published review, Ceballos and his co-authors highlighted some of the outcomes and impact of cassava breeding in the last 50 years. The article demonstrates a very dynamic process to define suitable breeding objectives and adequate methods.

“Crop genetic improvement has historically been the bread and butter of CGIAR,” said Ceballos. “Improved germplasm developed through breeding programs is a classic international public good with demonstrated large spillovers. The cassava breeding program is proof of the pudding of the benefits of that work.”

Getting that genetic gain

Ultimately breeding programs strive for genetic gain, which is a measurement of the amount of increase in performance that is achieved annually through breeding. “For cassava, gains are very diverse across African countries, but there are several studies demonstrating significant increases in productivity and sizable returns on investment,” said Ceballos.

During the 30-year period from 1975–2015, annual estimated gains were a respectable 0.23 t/ha for fresh root yield, 0.13% for starch content, and 0.12 t/ha for root dry yield. “We’ve also seen some remarkable gains in increases in the content of carotenoids, which are important from a nutritional standpoint since they contribute to Vitamin A,” said Ceballos.

The return on investment

It’s not easy to quantify the economic impact of breeding programs due to so many variables. A study in 2003 was able to estimate the economic benefits from the use of improved cassava varieties in 1998 alone at $USD12.9 million for Latin American and Caribbean (seven countries), $USD335.7 million for Africa (20 countries), and $USD99.5 million for Southeast Asia (five countries). “At the Alliance, after we considered total investments in cassava breeding, the internal rate of return is an encouraging 22%,” said Ceballos.

Despite this economic impact, overall funding for conventional cassava breeding has declined in recent years in favor of emerging technologies like genetic transformation and molecular marker research. To date, there is no commercially grown genetically modified cassava and the return on investment into the emerging technologies hasn’t been demonstrated. “Given that funding resources are limited, breeding teams need to evaluate carefully the impact of any new technology and such evaluation is long overdue,” said Ceballos.

In the case of cassava, breeders look for resistance or tolerance to prevalent abiotic or biotic stresses. Cassava mosaic disease (CMD) devastated cassava production in East Africa in the 1980s and 1990s. Breeders developed CMD-resistant varieties and as a result, the prevalence of CMD has dropped significantly.

Similarly, public breeding programs in East Africa have now released varieties tolerant or resistant to cassava brown streak disease (CBSD), another threat to cassava production in Africa. Researchers have found accessions of cassava in the Alliance genebank which display resistance to CBSD. “This is the first time that such strong resistance to CBSD has been found,” said Ceballos. “The challenge now for breeders will be to develop methods to incorporate those traits found in the resistant accessions into elite varieties. That’s more easily said than done.”

Advances in breeding aren’t always measured solely in increases in genetic gain, yield, or disease resistance. “The breeding programs that cassava at the Alliance and IITA have made a significant effort to improve the nutritional quality of the crop,” said Ceballos. “Biofortification of cassava with carotenoids (precursors of Vitamin A) via conventional breeding is proving to be a cost-effective method to combat micronutrient malnutrition.”

The cassava program at the Alliance was well attuned to the needs of different cassava markets. Cassava is the second most important source of starch worldwide. Finding and exploiting new types of starch, such as the amylose-free mutation (waxy starch), demonstrates that public cassava breeding programs have a clear vision of the needs and opportunities for the crop.

Cassava breeders like Ceballos can show off many success stories, like KU 50, from their efforts of the past 50 years. “Cassava continues to be one of the world’s most important food crops,” said Ceballos. “And as long as that remains true, cassava breeders will need to be prepared to address future challenges and take on new opportunities.”

RTB supports cassava breeding with the Alliance as an implementing partner through its Flagship Project 1 on Enhanced genetic resources.