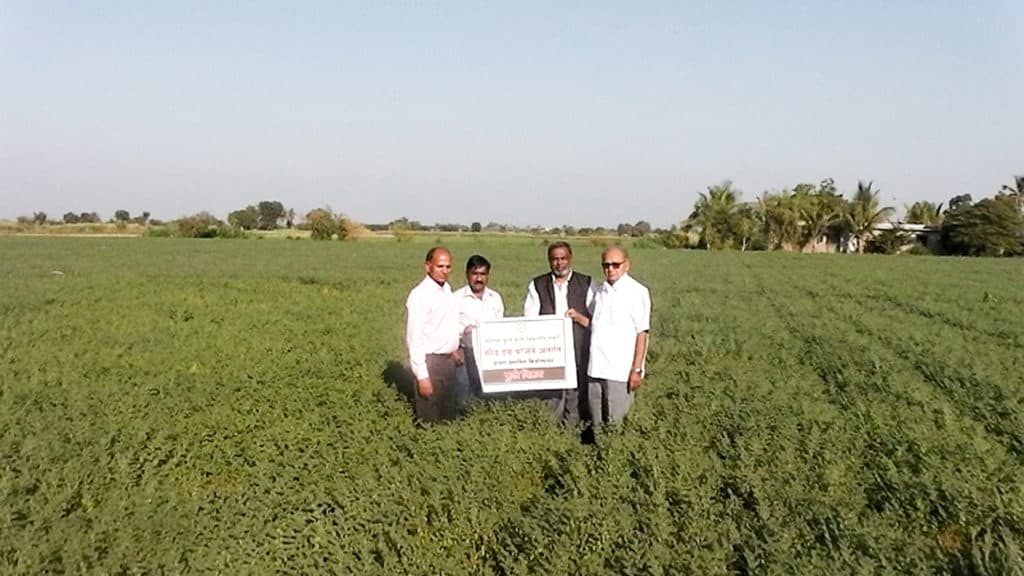 For the first time, the Central Varietal Release Committee (CVRC) of India has released two new machine-harvestable chickpea varieties. With this, the number of machine-harvestable chickpea varieties in India goes up to four. Phule Vikram (ICCV 08108) and BG 3062 (ICCV 08112) were recently identified for release in the Central Zone (Maharashtra, Madhya Pradesh and Gujarat states) of India, during the Annual Group Meet of the All India Coordinated Research Project (AICRP) on Chickpea.

Phule Vikram was earlier released by the State Variety Release Committee (SVRC) of Maharashtra, along with RVG 204 (ICCV 08102), which was released in Madhya Pradesh (https://www.icrisat.org/two-new-machine-harvestable-chickpeavarieties-released-in-india/) in 2017. Prior to that, NBeG 47 (ICCV 05106) had been released in Andhra Pradesh 2016 (http://www.icrisat.org/newsroom/latest-news/happenings/happenings1713.htm#1).

Traditionally, chickpea cultivars have a short and bushy architecture which makes machine harvesting difficult and causes significant yield losses. In addition, with increasing labor wages and a shrinking labor pool, many farmers have been demanding varieties that can be harvested by machine. The recently concluded project ‘Developing Chickpea Cultivars Suited to Mechanical Harvesting and Tolerant to Herbicides’ by ICAR and ICRISAT, and funded by the National Food Security Mission (NFSM) of the Government of India, supported the generation of diverse breeding material for developing machine-harvestable varieties. Apart from the released machine harvestable chickpea varieties, several more are in advanced stages of testing.