Facing COVID-19 in the highlands of Madagascar: How are the rural households and women coping? 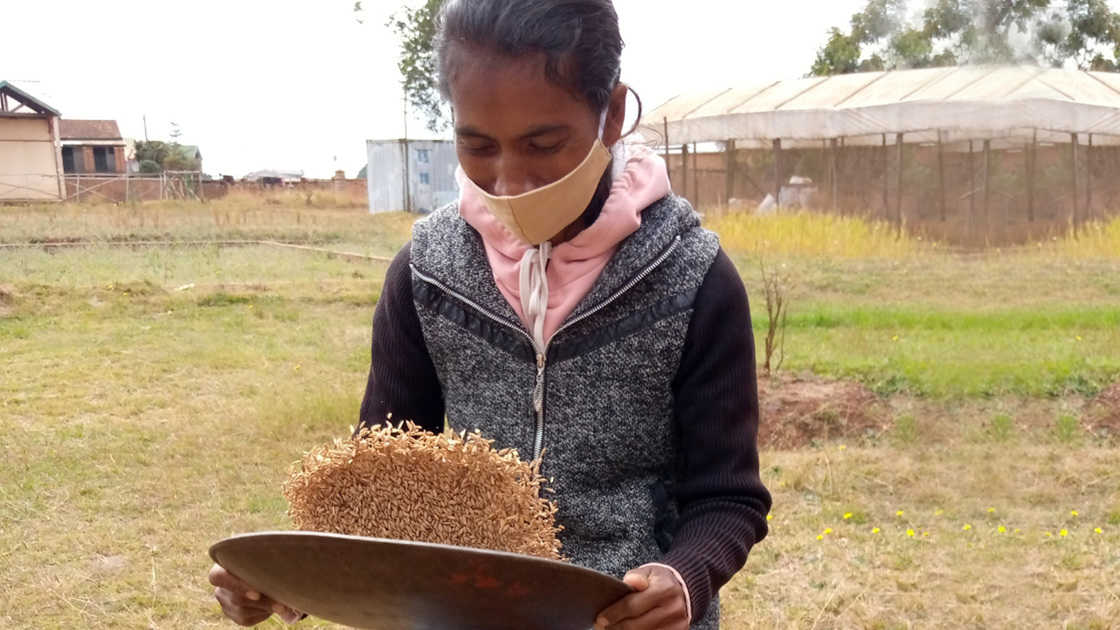 In early March 2020, as the world was getting increasingly hit by the COVID-19 pandemic, we thought Madagascar being an island nation would be somehow spared. In addition, the government was taking preventive measures. Between then and now however, the severity of the pandemic is increasing, and the possible effects of COVID-19 in an already poor country are deeply worrying. According to the World Bank, poverty and chronic malnutrition level respectively affect 74% [1] and 47%[2] of the population in the country.

The immediate effects of COVID-19 were associated with the partial confinement measures and closure of almost all economic, education and social activities, such as the loss of income resulting from unemployment, especially in private sector-led processing industries. The risk of food insecurity in the rural areas was high due to reverse migration of school-going children and urban workers, the restriction of movements of labor and goods and a generalized state of anxiety.

The preliminary results of an ongoing study collectively conducted in the Policy, Innovation systems and Impact Assessment program of AfricaRice to understand how the rural households in general and women farmers, in particular, are coping with COVID-19 indicate that the pandemic has not had much effect on rice cultivation in the highlands of Madagascar since it coincided with the end of the growing season.

This is quite a relief because rice is the most important crop in the country. Farming households that produce rice for their own consumption declared they had sufficient quantities and opted to store their surplus or even to sell, benefiting from the high selling price; an average increase of 200 Ariary (US$0.053) per kg was noted compared to the pre-confinement prices.

Sales of other food crops were also observed, including maize, soybean and groundnut. The sectors that suffered most were the perishable products, including vegetables such as cabbage, tomatoes, green beans, etc. and livestock products such as milk that faced disruptions in supply chains and consequently falling prices – up to one-third of the pre-pandemic price. Accessing seeds of crops that were being sown such as the off-season potatoes and beans was a major challenge as well as procuring animal feed and phytosanitary products, as these products had become expensive.

Despite the gains from the rice sales, rural households, mostly women, have seen significant declines in their incomes, from the loss of remittances due to temporary closure of processing industries, tailoring businesses, restaurants, etc., and absence of markets. To cope with such situations, most households have decided to reduce the per capita consumption of rice and of out-of-farm products such as meat and fish. Unfortunately, even without a market, vegetables are rarely consumed in the households. The households are planning to diversify in the near future, including in off-season cropping, sale of chickens and engagement in off-farm activities, among others.

While women have gained more time for themselves by sharing chores, they are mostly worried about increased household consumption due to confinement, and increased conflicts in some households between the young and the old, and men who go out for betting or drinking. At the same time, health concerns are also rising for pregnant women for instance.

Certainly, with the ease of confinement and opening of markets, the situation is improving, and farmers can benefit from income improvement. However, the battle against COVID-19 is not yet won, and its spread in the rural areas is now a serious concern. In addition to the health issue, it is necessary to anticipate the risk of seeds being consumed in rural households due to increasing food insecurity. Hence provisions of quality seeds to farmers should be prepared as of now. It is also important to sensitize rural households about the necessity of maintaining a nutrition-rich diet for boosting their immunity.