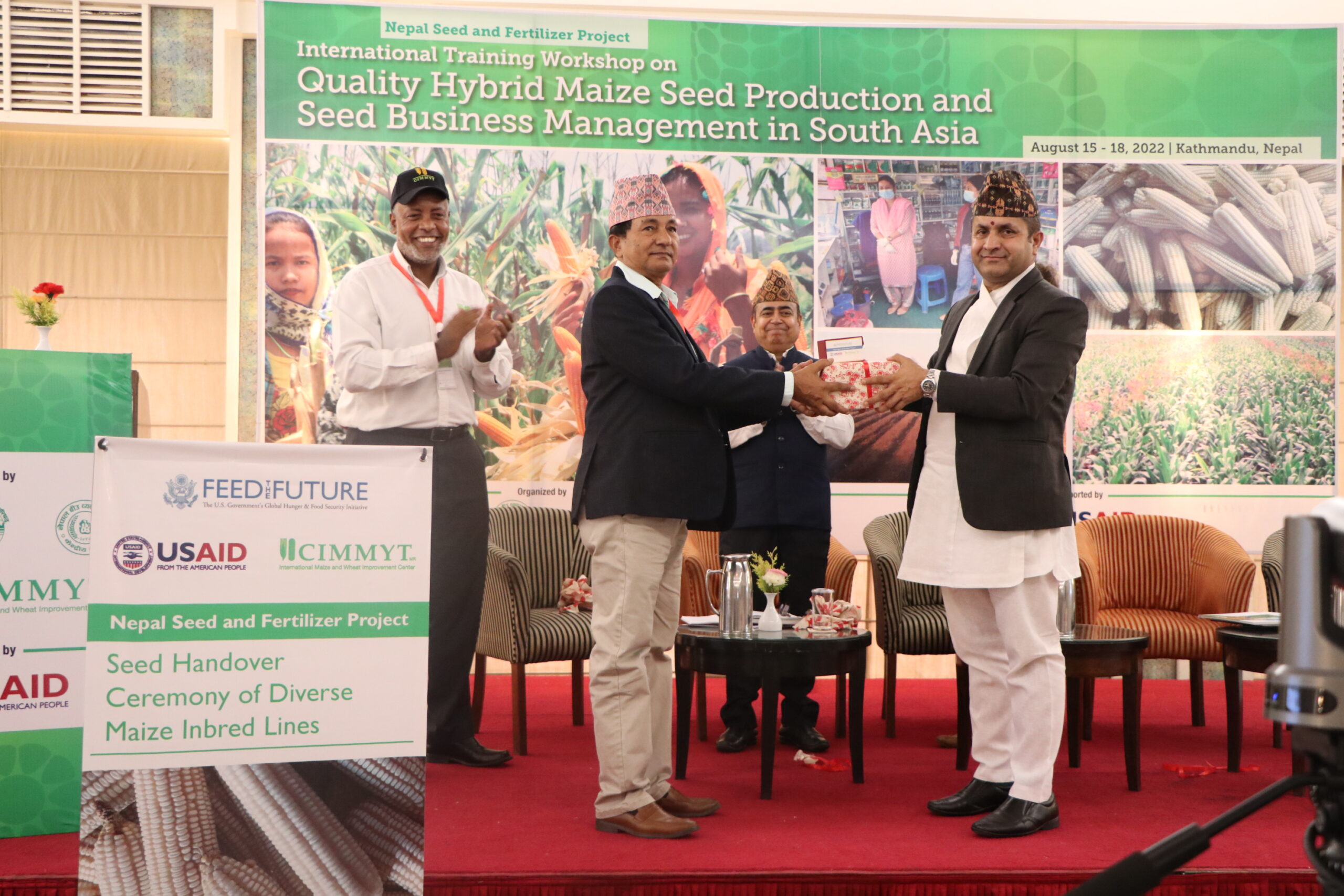 Maize is Nepal’s second most important crop for food security. Although the country’s diverse ecology can support maize production throughout the year, maize seeds and other grains, are largely imported each year.

Access to quality maize seed is one of the issues. Almost 85% of Nepalese farmers are unable to access quality certified maize seeds leaving them vulnerable to lower productivity. Traditional seeds, for example, are often unable to withstand extreme weather conditions induced by climate change. Nepal also has low seed replacement rates — around 20% for major cereals, which means that over 80% of farmers are either recycling seeds or use substandard quality seeds for each cropping season.

Over the past four years, researchers from the International Maize and Wheat Improvement Center (CIMMYT), through Nepal Seed and Fertilizer (NSAF) project supported by the United States Agency for International Development (USAID), have been assisting the National Agricultural Research Council (NARC) and private seed company partners to test market ready and multiple stress tolerant hybrid and synthetic maize varieties at various locations across Nepal and evaluate their suitability for cultivation. These maize varieties have come from CIMMYT’s maize breeding hubs in Mexico, Zimbabwe, Colombia and India as well as the International Institute of Tropical Agriculture (IITA).

After over two years of testing and identifying the best performing varieties, Secretary of the Ministry of Agriculture and Livestock Development, Govinda Prasad Sharma handed over the seeds of selected maize varieties to NARC and seven partner seed companies for further testing, variety registration and seed scale up in Nepal. The handover ceremony took place on August 18, 2022 at the Quality Hybrid Seed Production and Seed Business Management International Training Workshop, which gathered together a diverse range of maize stakeholders from Nepal and South Asia.

The maize seeds include varieties enriched with provitamin A and zinc, aflatoxin tolerant synthetics, white and yellow kernel hybrids, and sweet and popcorn maize varieties. As well as being good for nutrition, the seeds are high yielding. Synthetic varieties have the potential to yield 6-7 metric tons (t) per hectare, while the hybrid varieties may yield over 10t — a significant increase from 3-5t of local seeds.

Climate change resilience is a vital trait for modern crops. Climate change is posing a threat to crops, with traditional varieties often unable to withstand extreme weather conditions. Included in the handover were climate resilient, early maturing seeds which take less than 100 days to mature in the summer season, reducing their exposure to drought. Among the handed over seeds were varieties tolerant to fall armyworm — a devastating pest threatening maize production in Nepal.

Stress tolerant and high yielding varieties suitable for such extreme conditions are needed now more than ever to increase on-farm yield levels. Nepal also needs a vibrant last mile seed delivery system and mechanisms to support and serve under-reached populations, including women and smallholder farmers. Sharma acknowledged CIMMYT’s support in sharing these elite and diverse maize seeds, which will contribute towards the government’s efforts of self-sufficiency in major cereals including maize.

“USAID is pleased to be collaborating with both the Government of Nepal and private sector partners through the NSAF project to enhance maize production and productivity at the farmer level,” said Jason Seuc, director of the Economic Growth Office at USAID.

“Once the range of maize seeds become widely available in the market, these varieties will play a major role in enhancing the food and nutrition security to millions of farmers who use maize directly or indirectly in the food chain, especially for those living in the hills.”

The exclusive allocation of the new products to partners complements the project team’s efforts to support private seed companies who have recently acquired research and development licenses and can subsequently register varieties under their own brands.

“We are handing over not only seeds and technologies to our partners but also responsibility, so that these varieties can make it to the farmers’ field in the shortest time possible,” said AbduRahman Beshir, NSAF’s seed systems lead at CIMMYT.