Designing gender-sensitive and climate-smart technologies: a must for the future of Guatemalan agriculture 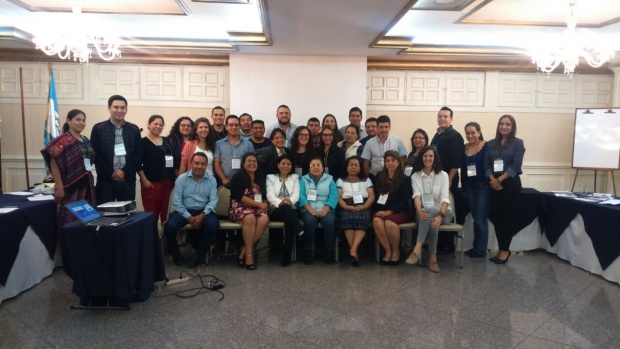 A recent National Geographic article opened with the shocking headline: “Changing climate forces desperate Guatemalans to migrate”. Unfortunately, headlines like this are becoming more and more common in one of the most densely populated countries in Central America. Changes in climate, coupled with other pre-existing stress factors such as extreme poverty, are disrupting agricultural livelihoods in many rural areas of Guatemala. Men, who are usually considered the heads of the households, are forced to migrate in search of better opportunities, leaving their spouses and children behind.

These emerging climate-induced trends are in turn also affecting intra-household gender relations, with women now needing to take care of the on-farm work their spouses used to be in charge of, increasing their labor burden. This only adds to the already striking gender gaps that the Guatemalan agricultural sector presents. For example, the National Agricultural Survey of 2005-2008 revealed that women had access to only 16% of the land and found unequal access to agricultural inputs and formal credit schemes (MAGA, 2015).

Amidst these challenges, it is clear that public and private agricultural interventions that aim to support economic development in rural areas of Guatemala will need to take a holistic approach. Accordingly, there is a need to design actions that simultaneously address gender and climate change aspects across all phases of these projects. For instance, gender-sensitive climate-smart technologies could help farmers adapt to new climate conditions while increasing productivity and food security in an equitable manner.

In this context, on October 11th researchers from the International Center for Tropical Agriculture (CIAT), together with the Climate Change and Gender units of the Ministry of Agriculture, Livestock and Food of Guatemala (MAGA, in its Spanish acronym), organized a workshop. The aim was to strengthen the capacities of national actors for the formulation and implementation of climate-smart agricultural technologies programs with a gender approach. The workshop was attended by 33 participants from 15 institutions, including national institutes and bodies, international organizations, and civil society. This collaboration forms part of an ongoing project led by the CGIAR Research Program on Climate Change, Agriculture and Food Security (CCAFS) and supported by the International Development Research Centre (IDRC)#0c6772">.

To set the scene, introductory presentations covered an overview of CCAFS’ work in Latin America; the linkages between climate change and gender, and how to mainstream gender issues in the planning, design, monitoring and evaluation of CSA interventions.

The focus on participatory activities facilitated a process of co-learning by doing and provided key tips for designing agricultural development interventions and monitoring and evaluation systems, with a stronger climate and gender lens. During the workshop, Martin Leal, head of the climate change unit of MAGA, shared the need to develop good mechanisms and tools that would allow the institution to fully implement climate change and gender issues in its programs.

“We have seen that the monitoring system of our ministry is not strengthened sufficiently to allow for a close assessment of how gender and climate change issues are affecting our communities”, he said.

Indeed, it is fundamental to incorporate mechanisms that allow for the collection of gender-disaggregated data into everyday national extension services. In particular locations, this helps especially with identifying the most pressing gender gaps in agriculture and how climate change is affecting social cohesion in the communities.

To strengthen the capacity of local actors and national level institutions to integrate climate change and gender issues in their own interventions, the workshop used the “Community Development Plan of the Polochic River Region”, as an illustrative project. Using a participatory tool, the workshop participants had the opportunity to develop specific impact pathways for several Polochic commodities, which culminated in the design of viable gender and climate change indicators for each of the commodities.

The workshop provided many spaces in which climate change and gender focal points of different institutions shared their common challenges when designing and monitoring projects for climate change and gender issues. During the discussions, participants commonly  made reference to the challenge of not having sufficient economic recourses to incorporate gender considerations into current projects. This initiated an interesting debate. Participants discussed whether considering gender issues necessarily implied an added cost, or whether some minor changes in project design and existing monitoring strategies could be beneficial.

Other constraints had a more structural nature, such as the insufficient interest of heads of institutions to engage with gender issues, which would require advocacy and long-term normative change. Overall, the debates during the presentations and participatory activities in the workshop provided a space to exchange ideas, and emphasized the need for joint institutional efforts towards better-designed projects and stronger monitoring systems that can track progress in closing the gender gap in agriculture.

Next steps will involve close interactions between CCAFS and CIAT researchers and the Climate Change and Gender units at MAGA, to support their efforts to strengthen and mainstream gender and climate change indicators in MAGA’s System for Information, Planning, Monitoring and Evaluation (SIPSE). As a follow up to the interest expressed by other institutions such as the Presidential Secretariat for Women (SEPREM), CCAFS will continue to engage in dialogue to identify research needs and entry points for collaboration.