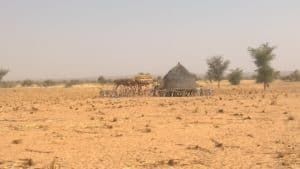 Of the 12 interventions identified for agriculture by the Global Commission on Adaptation (GCA) in its September report, ‘Adapt Now: A Global Call for Leadership on Climate Resilience’, research and development has a role to play in nine interventions. That is just about the number of interventions involving policy and markets, and two more than those that require financial input.

In addition to breeding climate resilient varieties, conservation of landscapes and helping pastoralists adapt, the GCA underscores the need for research and development in on- and off-farm diversification, increasing market access, crop and livestock insurance, rights of women farmers, transition funding and helping devise mechanisms to narrow the gap between adaptation and mitigation.

Clearly, the world’s largest agricultural research for development organization, CGIAR, and its partners, have multiple roles of play.

The role of innovation brokers or facilitators–bringing together available capabilities–is just as important as doing the science itself. The need to assimilate capabilities is the greatest in sub-Saharan Africa and South-Asia, regions that are most food-insecure today and where populations are expected to double by 2050 with commensurate increase in demand for food.

Without intervention in these regions, crop productivity gains that might be made can be undermined by climate variability and extreme events, even as contributions to global emissions from agriculture may rise exponentially and augment farm distresses. It is not exaggerated to say that the resulting consequences of economic and food insecurity will be unimaginably troubling.

Brokering on-farm research in the drylands

Smallholder farmers in the drylands are among the most affected in a warming world. These regions are witnessing frequent climate variations, changes in pest and disease patterns and reduced water availability. Land degradation, resulting from inefficient farm practices, land clearing and overgrazing, perpetuates the damage to farm systems.

Identification of local or regional effects of climate change is critical to enhancing smallholder incomes without increasing emissions. Modelling for variable climate scenarios can help researchers arrive at efficient adaptation and mitigation pathways, but climate-smart crops, bred to challenge biotic and abiotic stresses, may alone not suffice as a solution.

The capacity of farmers will have to be enhanced to adopt digital technologies, to acquire new cropping techniques, practice unfamiliar natural resources management methods or diversify farm activities. Many farmers in India, Mozambique and Zimbabwe have sampled the benefits of livestock rearing when crops fail following extreme weather events. Farmers in India and Africa are also being encouraged to cultivate crops for purposes other than food production.

Working within CGIAR’s flagship, the Research Program on Climate Change, Agriculture and Food Security (CCAFS), and beyond, the group’s 15 institutions, including the International Crops Research Institute for the Semi-Arid Tropics (ICRISAT), have often facilitated solutions by brokering research multilaterally. Strong linkages with private and public institutions across a nation’s value chains are instrumental for the success of adaptation and mitigation strategies.

Water management in the highlands of Yewol in Ethiopia through stone terraces prevented water run-off and erosion on the slopes while accruing a gamut of benefits for communities both in the uplands and the valley. Nearly all of the watershed area, around 7,500 hectares, was terraced. Degraded land turned fertile and farmers began diversifying crops for improved incomes and nutritious food. A robust partnership was at play in the community-driven initiative with national partners and CGIAR center, the International Livestock Research Institute (ILRI), with ICRISAT playing the role of a research catalyst through its expertise in watershed management.

Similarly, in the Parasai-Sindh watershed of Bundelkhand region in India’s Uttar Pradesh, farmers’ incomes were more than doubled following increased water availability through efficient water harvesting and management. This work prompted a scale-up across the region which is now underway.