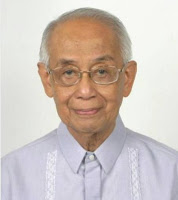 Bienvenido O. “Ben” Juliano, 81, world-renown cereal chemist and Philippine National Scientist, passed away on the morning of 21 February in Los Baños, Laguna. He was among the first cadre of elite scientists who helped set the direction of the International Rice Research Institute (IRRI) during the institute’s early years. Arriving as an associate chemist in 1961, he went on to spend more than 32 years at IRRI, most of them as head of the Cereal Chemistry Department.
IRRI’s first director general, Robert Chandler, Jr., who hired him, later wrote, “Without question, the broad scope of Dr. Juliano’s work in cereal chemistry advanced decidedly the world’s knowledge of the cooking, eating, and nutritional qualities of the rice grain; he was a pioneer in analyzing IRRI’s world collection of rice varieties for protein content.”
In 1993, Klaus Lampe, a later IRRI director general wrote: “It is primarily due to Dr. Juliano’s dedicated work in this important research area that IRRI scientists and their colleagues can routinely measure grain quality in pre-breeding efforts that are serving the national agricultural research systems.”
Bestowed the honor of National Scientist in 2000 by Philippine President Joseph Estrada (photo,

right), Dr. Juliano’s rice taste-panel research showed that the amylose and amylopectin contents of the starch largely determined rice’s cooking and eating quality. He found that a higher proportion of amylose provided a greater tendency for rice to cook dry and fluffy. So, based on this research, it became clear that the rice eaters of the Philippines and Indonesia preferred medium-amylose rice grains. IR24, the first IRRI variety to meet this requirement, was released in 1971.
Born on 15 August 1936 from a family of accomplished scholars, the young Ben Juliano showed brilliance and academic excellence. He graduated early from college at the University of the Philippines Los Baños (UPLB) with a magna cum laude B.S. in Agriculture in 1955 and eventually became the youngest (at the age of 22) “straight-A” PhD graduate in organic chemistry in 1959 at The Ohio State University. Shortly after that, he returned to the Philippines and joined IRRI where he would pursue his life’s work for the next 3 decades until his “retirement” in 1993.
In 1993, he produced two books that brought together many elements of his scientific body of work, Grain Quality Evaluation of the World’s Rices, published by IRRI, and Rice in Human

Nutrition, published by the Food and Agriculture Organization (FAO). Dr. Juliano put together the FAO book to serve a wide range of readers in government, universities, and industry as a general source on most aspects of rice production, processing, trade, and consumption. His IRRI book (written with C.P. Villareal), was aimed at rice breeders and chemists involved in grain quality breeding programs and for food scientists and nutritionists interested in rice grain quality, composition, processing, and use. It was translated into Japanese in 1999. He also released a 10-chapter book in 2003, revised in 2007, Rice Chemistry and Quality, which was launched by the Philippine Rice Research Institute (PhilRice).
After his IRRI retirement, Dr. Juliano was invited to visit cereal laboratories in Vietnam, Myanmar, China, Bangladesh, Cuba, and Taiwan to give recommendations to their rice quality breeding programs. He also helped to build the grain-quality research capability of PhilRice where he continued to pursue his rice research as a senior consultant/expert, bringing his time devoted to cereal chemistry research to a half century.

In addition to being named a Philippine National Scientist in 2000, Dr. Juliano received numerous honors and awards throughout his stellar career including: the Ten Outstanding Young Men (TOYM) Award from the Junior Chamber of Commerce of the Philippines for his achievements in science (1964), the President of the Republic of the Philippines Jose Rizal Pro Patria Award (1976), election into the National Academy of Science and Technology of the Philippines (1979). the only non-Japanese Asian to be presented with the Medal of Merit by the Japanese Society of Starch Science (1982), and the only Asian and rice scientist to receive the Thomas Burr Osborne Medal Award from the American Association of Cereal Chemists (1988).
He also was the first Filipino to be honored by the Association of Southeast Asian Nations (ASEAN) as an Outstanding Scientist and Technologist during the ASEAN Science and Technology Week (1988), recipient of the National Research Council of the Philippines’ Cluster I (Physical Sciences) National Researcher Award during its 60th Jubilee Celebration (1993), and recipient of a plaque of recognition for lifetime research on rice quality awarded by IRRI on the occasion of the dedication of the institute’s new Grain Quality and Nutrition Center (2004).
Necrological rites were held 24 February at St. Therese of the Child Jesus Chapel, Los Baños, Laguna. During those services, attended by many colleagues and friends, Dr. V. Bruce J. Tolentino, IRRI’s Deputy Director General for Communication and Partnerships, spoke in behalf of the institute. Among his remarks, he stated: “A key legacy of Dr. Juliano at IRRI is the establishment of the Grain Quality and Nutrition Center. Looking at today’s trends, and into the future, the GQNC is increasingly becoming the locus of the work of IRRI. This is the center that bridges and translates consumer demands into the work of the breeders, agronomists, and other scientists. Overall, consumers care about not only the taste and eating quality of the rice, but also the impact of rice on their nutrition and health – particularly as their incomes grow. As a cereal chemist, Dr. Juliano laid the foundations of the methods and approaches to grain quality testing at IRRI – and it looks like this will be a key basis for the evolution of IRRI in the years to come.”