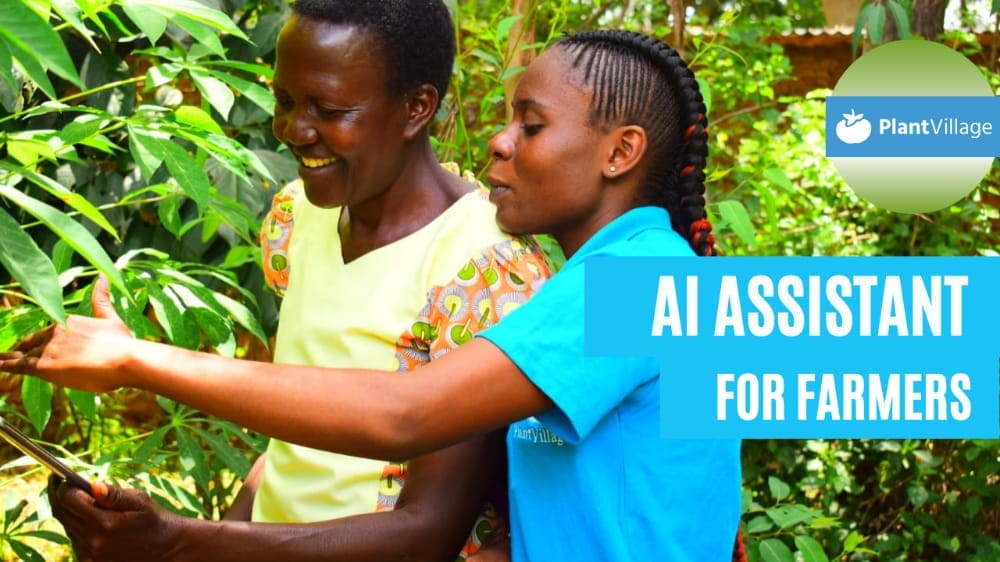 The AI-powered mobile app PlantVillage Nuru has been expanded to include potato diseases, allowing farmers to identify and manage diseases in their field.

In 1845, farmers in Ireland reported seeing a “blight of unusual character,” a “fearful malady” with no known cure. That malady spread quickly and caught farmers unaware. By the end of the next year, three quarters of the Irish potato crop was decimated.

In response, the world’s first agricultural and advisory service was developed to help Irish farmers cope with the terrible blight. Since then, potato farmers around the world have relied on human experts – extension officers – to help them cope with this persistent scourge. But in low-resource settings like Africa this is a problem because extension services are often limited and underfunded.

New advances in artificial intelligence (AI) can help put a virtual extension officer in the fields of every farmer. As of this week, farmers in Kenya and other countries will be able to point their smartphone at a potato plant and receive an instant disease diagnosis through the PlantVillage Nuru app. The app was originally established to be twice as good as extension workers in East Africa in diagnosing cassava diseases and has been a major help to cassava farmers. Now this advancement can work for more than two million farmers in East Africa who depend on potato.

“We’ve come a long way with disease detection and the rapid dissemination of management advice since the Irish Potato Famine ravaged my home country,” said David Hughes, Dorothy Foehr Huck and J. Lloyd Huck Chair in Global Food Security at Penn State University in the United States. “The Famine kickstarted the field of plant pathology and helped formalize agricultural extension services. But the benefits of such knowledge still don’t reach millions of low-income farmers in Africa. AI can be that personal extension officer working for low-income farmers in Africa.”

David, together with James Legg a plant virologist with the International Institute of Tropical Agriculture (IITA) and Jan Kreuze, Leader of the Crop and Systems Science Division at the International Potato Center (CIP), pioneered the diagnostic mobile phone app which can serve as a digital assistant to help farmers identify diseases in their fields without an Internet connection and receive SMS alerts.

“We named the app ‘Nuru,’ which means ‘light’ in Swahili,” said David. “Very simply, farmers are in the dark without knowledge from experts and Nuru is the light in that darkness.”

Farmers in Kenya have found Nuru helpful to get them out of the dark.

“Since I received a smartphone with the PlantVillage Nuru app my cassava farming has improved,” says Josephine Arisat, a cassava farmer from Busia County, Kenya. “The app helps me identify the different types of diseases affecting my cassava. Initially, I used to harvest rotten cassava tubers if their leaves looked healthy. I never knew that cassava leaves can showcase diseases. With the help of Nuru, I can scan my cassava leaves and know if they are affected by either cassava mosaic disease, cassava green mite or cassava brown streak disease. The app then gives me advice about how to treat the diseases.”

The app is linked to Penn State’s online PlantVillage platform, which allows farmers to receive advice from experts at government agencies, universities and research organizations in local languages. The service is currently available in Swahili, French, Twi, Hindi and English.

Nuru was initially launched in 2018 to diagnose cassava diseases in Africa but has expanded to insect pests like fall armyworm and locusts with UN FAO. “Hundreds of millions of farmers across sub-Saharan Africa grow cassava and potato, which can be prone to diseases,” said David. “One of the biggest challenges is that farmers are often unable to correctly identify the diseases and access timely information of the best ways to act.”

In order to accurately identify the diseases, the project generated 200,000 images of healthy and diseased cassava. Researchers found that PlantVillage Nuru can diagnose symptoms of cassava diseases at a considerable higher accuracy than the agricultural extension agents and farmers.

“Features such as the in-field diagnosis of pests and diseases and the direct link to expert knowledge for advice give farmers the ability to rapidly transform their agriculture,” said John Chelal, Projects Director for PlantVillage in Kenya. “This directly contributes to the creation of well-educated farmers and a skills revolution underpinned by science, technology and innovation for a knowledgeable society.”

From cassava to potatoes

With support from the CGIAR Research Program on Roots, Tubers and Bananas (RTB) and the CGIAR Platform for Big Data in Agriculture, PlantVillage Nuru has been expanded to include potato late blight (Phytophthora infestans) and early blight (Alternaria solani).

The same fungus which decimated the Irish potato crop during the Famine continues to wreak havoc in Africa. In Uganda, for example, late blight can destroy up to 60–100% of the potato crop.

“We collected over 8,000 images of healthy and diseased potato leaves,” said Pete McCloskey, lead AI engineer at PlantVillage who worked closely with CIP. “Each leaf was then precisely annotated in order to train a neural network that runs off-line, in real-time on the phone, to localize and recognize the symptoms of potato early blight and late blight.”

Mobile phone usage is high amongst farmers in African countries such as Kenya but not all farmers have an Android smartphone. “Through our CGIAR INSPIRE grant we are providing phones to potato farmers in Kenya to replicate the success we had with cassava,” said David.

An innovative approach is not just relying on smartphones but also sending SMS messages to farmers based on the reports being received by lead farmers with phones. Currently PlantVillage is reaching almost 500,000 farmers via SMS in Kenya with iShamba.

The next step will be to update the app for other tubers, such as sweetpotato and yams, and bananas.

AI is often seen as a threat to jobs but in places where too few experts exist, it is an opportunity. One that can turn the tide of terrible scourges like late blight of potatoes.

PlantVillage Nuru is available for download at no cost onto Android devices through Google Play or Apple devices via App Store.