After 10 years, Triple S has brought back sweetpotato to us 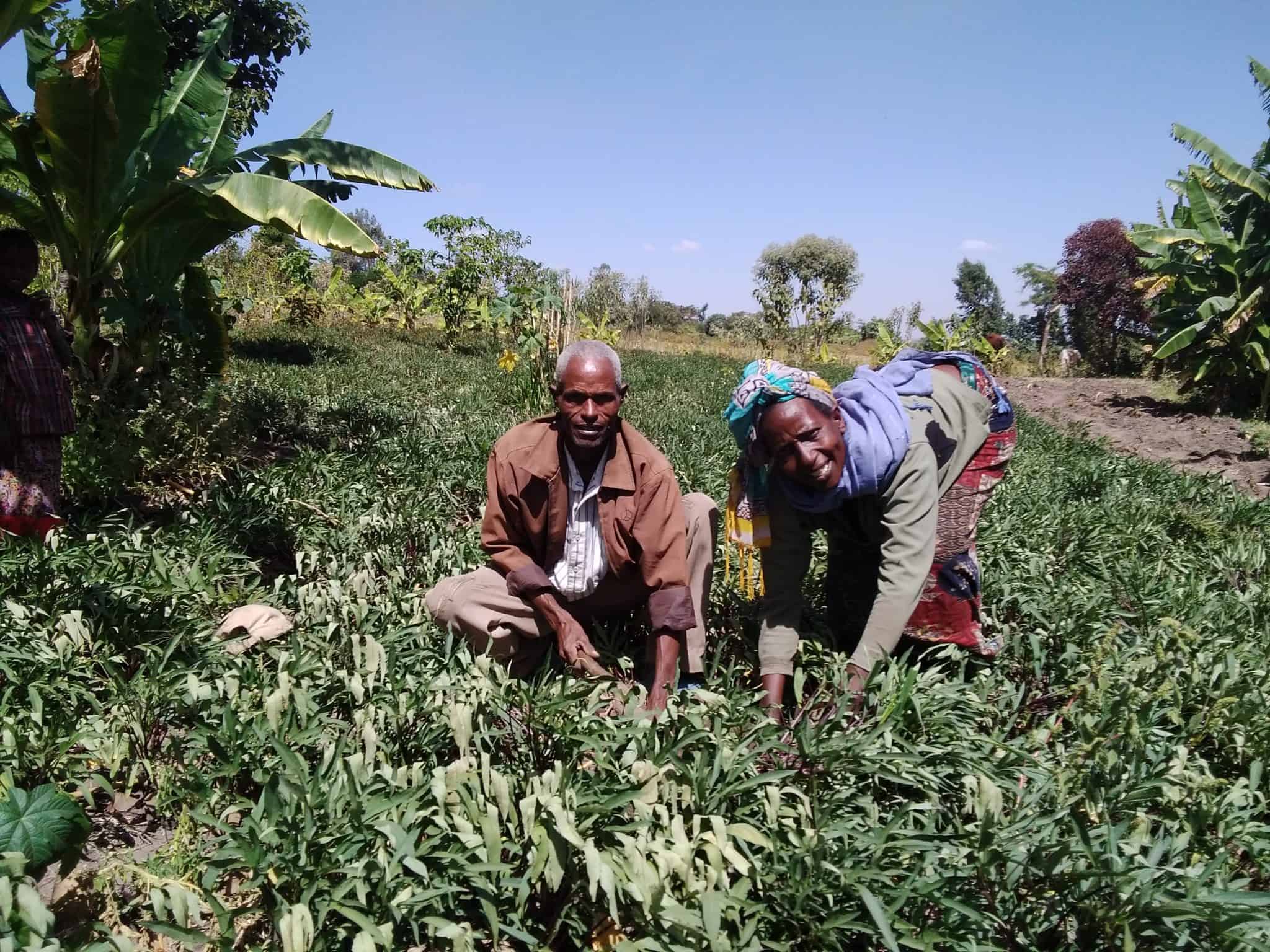 1st Amburse Kebele in East Badewacho district was once known as a prolific sweetpotato growing kebele in the Southern region of Ethiopia; Southern Nations and Nationalities Peoples Region (SNNPR). This changed 10 years ago when farmers lost planting material due to the combined effect of extended drought, pests and diseases. For more than a decade, farmers were able to get planting material through seed aid and sometimes from the local market, but it was difficult for farmers to maintain the planting material season to season.  A year ago, the International Potato Center (CIP) in partnership with the regional Bureau of Agriculture and Natural Resources Development (BoARND) sought to change this situation by training farmers on a new technology – Triple S (storing sweetpotato roots in sand and sprouting) in order to introduce climate-smart method of sweetpotato planting material conservation feasible for dry areas like 1st Amburse Kebele.

Using a scaling approach promoted by the CGIAR Research Program on Roots, Tubers & Bananas (RTB) CIP and the focal person in the district, Birhanu Shanko, identified four champion households in each of the 12 kebeles and trained them on how to use Triple S by using video, step-down Trainer-of-Trainers (ToT) and radio programmes.  1st Amburse Kebele is one of the four kebeles where 200 farmers were trained using the video approach. As the farmers did not have enough roots to put Triple S into practice, CIP arranged to provide 20 roots for 20 households in the kebele to start them off on using the technology. Tekele Abeta and his wife Ayelech Teto, were among the households selected.

In mid-December 2019, CIP and BoARND staff visited their farm to check on the progress of their crop. Both Abeta and Teto were very happy with the Kulfo orange-fleshed sweetpotato (OFSP) variety. They planted their crop near their homestead, right next to the enset (local sterile banana variety) plantation. Despite this being the beginning of the dry season with most of the farm around them a dusty brown (after the maize and teff harvest) their plot of sweetpotatos were a rich green.

“We like this technology and the new OFSP variety” Abeta beamed “It matures very quickly and seems quite resistant to pests. I can plant sweetpotato towards the end of the rainy season and still have a good harvest of roots and fodder for my cows when everything else starts to dry up” he concluded.

Abeta and his wife found the videos very useful. They attended the first training held at a local church in early December 2018, and a follow-up training a week later. The videos were simple enough to understand and practical, so it was easy to set up the Triple S container with the roots and sand. To save on the cost of the plastic container (150 Birr, approximately 3 USD), Abeta opted to use easily available and free cardboard boxes. In January 2019 a kebele development agent visited him and was happy with how Triple S was set up.

In late April 2019 when the rains started, Abeta and Shanko that they intended to multiply. By multiplying planting material from the 18 surviving roots, they were able to get enough planting material for a plot 0.1ha (50x20m2). Today they are very happy with the result. Abeta is confident that he will no longer have to worry about sweetpotato planting material. The other farmers in his community regularly visit his farm to see his sweetpotato crop and learn about the Triple S technology. This season, he shared planting material with farmers in his community. So far, they are happy with the crop especially the fact that it is fast maturing and has a good yield even after being planted towards the end of the rainy season.

It is harvest time in 1st Amburse kebele and Abeta and Teto are preparing to store roots using Triple S and enjoy eating the roots with the family.

“First, we boiled it but it was too watery, now we steam it and like it very much!” Teto said “please come and train us on other ways to cook it, we will try, we like new technologies.”

Mihiretu Cherinet, the scaling champion from CIP, assured her that cooking demonstrations had been planned and would be happening two weeks from when the roots have matured and been harvested.

The visiting team concluded by planning for the cooking demonstrations. Ayelech assured them that she would let her neighbours know because they have also been looking forward to learning new ways of cooking OFSP. Abete and Ayelech are truly living up to their role as a champion household.

* Cooking demonstrations were held in the last week of December  2019to demonstrate the preparation of OFSP based food products.