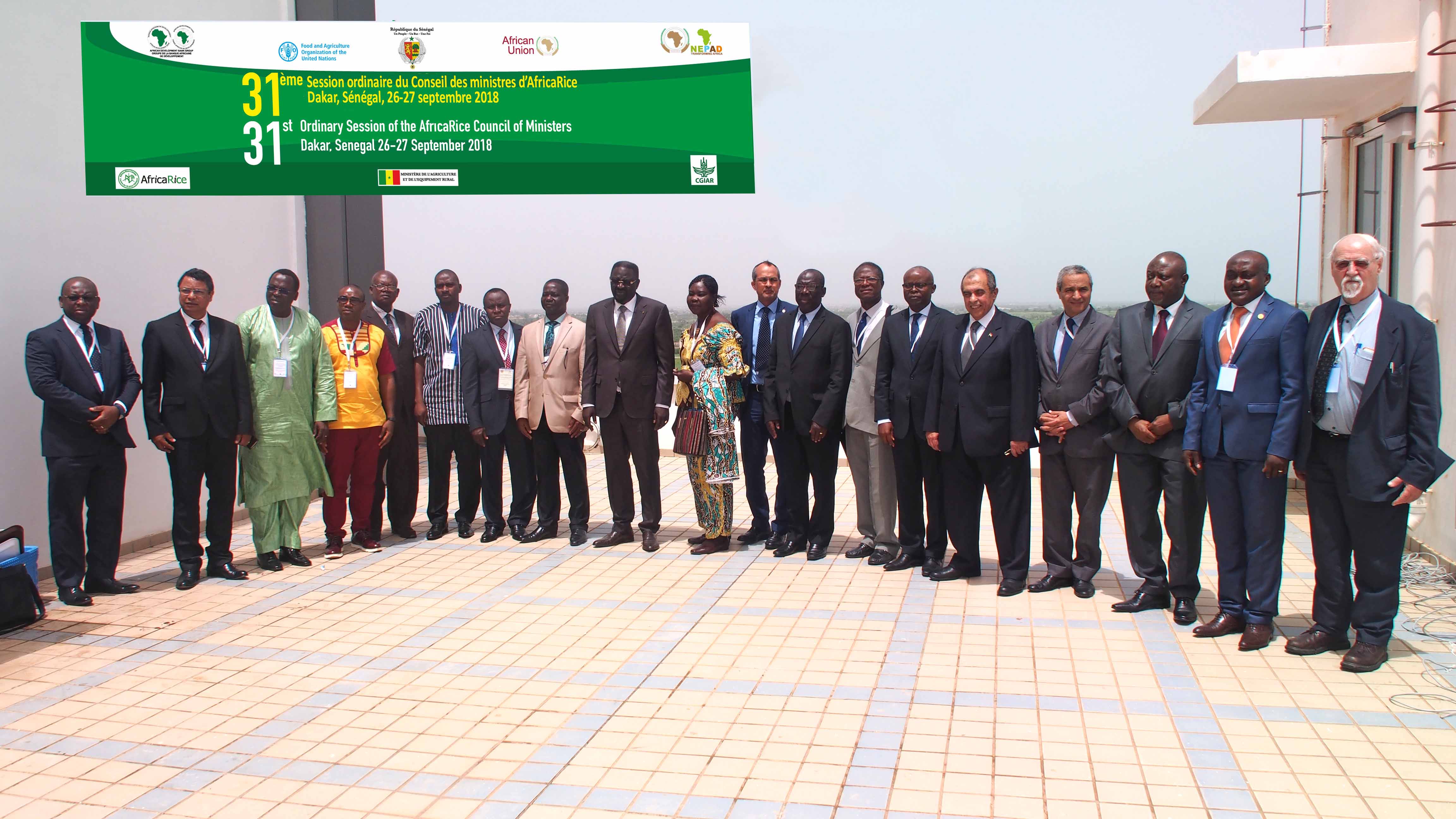 The 31st Ordinary Session of the Africa Rice Center (AfricaRice) Council of Ministers held recently under the chairmanship of His Excellency Dr Papa Abdoulaye Seck, Minister of Agriculture and Rural Infrastructure of Senegal, reaffirmed strongly its commitment to support AfricaRice to help accelerate Africa’s rice self-sufficiency.

Calling it a “historic” session, the chair stated, “The AfricaRice Council of Ministers has pledged to pay membership arrears within a clear time frame so that AfricaRice, which serves as the common tool of its member countries for rice research and development at the continental level, can more effectively address their priorities relating to rice sector development.”

The chair underlined that this resolution demonstrates the strong ownership of AfricaRice by its member countries. “We have taken a bold step in carrying out our responsibility towards AfricaRice and we will inform our highest authorities in each of the member countries of the imminent risk of nonpayment of membership contributions.”

The Council appreciated that AfricaRice is a CGIAR Research Center that is institutionally and culturally well-embedded in the African continent. It also recognized that AfricaRice is an important partner with the International Rice Research Institute (IRRI) and the International Center for Tropical Agriculture (CIAT) among others within the CGIAR Research Program on Rice Agri-Food Systems (RICE).

Highlighting the vital importance of mobilizing global knowledge for Africa through this partnership, the Council called upon the international scientific community, especially the CGIAR System Organization, to provide stronger support to rice research for Africa and to AfricaRice in particular, as rice has become a strategic commodity across the continent. During the last 10 years, rice consumption in sub-Saharan Africa (SSA) has increased by 81%, while production has increased by only 55%.

The Council urged AfricaRice to strengthen collaboration with major rice initiatives in Africa, such as the Coalition for African Rice Development (CARD), the Regional Rice Offensive of the Economic Community of West African States (ECOWAS), the Competitive African Rice Initiative (CARI) and the National Center of Specialization on rice (CNS-Riz) under the West Africa Agriculture Transformation Program (WAATP).

The Council endorsed the African Development Bank-funded AfricaRice-led initiative ‘Continental Investment Plan for accelerating Rice Self-Sufficiency in Africa’ (CIPRiSSA), which provides a roadmap for accelerated action to reach self-sufficiency in rice by 2025 for 10 pilot countries in Africa. It tasked AfricaRice to extend the CIPRiSSA study to other member countries, so that they can also benefit from evidence-based information on the rice value chain and the investment options required to achieve rice self-sufficiency.

These were among the 15 key resolutions passed by the 31st Ordinary Session of the AfricaRice Council of Ministers after reviewing the biennial report of the AfricaRice Director General and the recommendations of the National Experts Committee. The Director General’s report highlighted important achievements of the Center mainly concerning advocacy, research and development, strategic alliances, finance, human resources, governance, and CGIAR-related activities.

Despite severe financial challenges, AfricaRice has been able to deliver and disseminate to its member states significant results in the areas of rice varietal creation (52 stress-tolerant rice varieties released over the past two years in SSA countries), good agronomic practices and decision-support tools, value addition options, policy findings, and capacity development.

“These results contributed to increasing the performance of the rice value chain, boosting development of the rice sector especially in our member countries,” stated AfricaRice Director General Dr Harold Roy-Macauley. He also presented the Rice Value Chain Resource Center (RVC-RC) model, which would help commercialize the rice sector through mechanisms that reduce risks along the value chain.

The Council expressed its satisfaction that 74% of 151 peer-reviewed journal articles by AfricaRice were published with national partners. It commended AfricaRice efforts in capacity development of national researchers and rice value chain actors, noting that over 190 postgraduates (including 84 female postgraduates) and 17,581 participants in group training programs had benefitted from these efforts over the past two years.

The Council congratulated and encouraged the AfricaRice Director General, Management and staff for the achievements made under challenging financial conditions. A special vote of thanks was accorded to the President, Government and people of Senegal for their warm hospitality and for the successful hosting of the 31st Ordinary Session of the AfricaRice Council of Ministers.